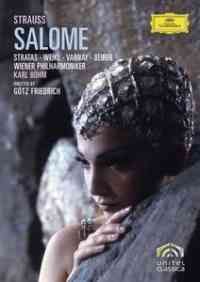 Stratas's sinuous child-woman comes close to the ideal in Friedrich's glitzy but unnerving film, strongly cast throughout and superbly conducted.

Götz Friedrich's Vienna studio film of Strauss's spooky study of necrophiliac lust (and much else) created quite a stir when it was first shown on TV more than 30 years ago. It has dated badly – largely on account of the porn-shop leather costumes (Jan Skalický), the director's then inexperience in film and penchant for phallic imagery, and Gerd Staub's plexiglass scenery.
The 'Carry On Cappadocia' atmosphere is not improved by Salome's clumsily choreographed and over-veiled dance, which Terry Scott would at least have made funny.
At the start of her international career, Teresa Stratas's poor German, aurally evident struggle (even in overdubs) with a part that was in real terms much too heavy for her, and overdone gesturing get in the way of her normally matchless acting. She (and Friedrich) never find the fey terror lurking behind the readings of Welitsch or Cebotari. Weikl sounds well but, when the camera's not looking salaciously at his legs, he seems lost. The star performers here are the veterans who, one suspects, do brilliantly what they've always done: Beirer's unnervingly sympathetic Herod, and Varnay's horrific Herodias (look at her eyes as she watches her daughter dance or backs her demand for Jokanaan's head) – every inch a vicious queen.
Böhm and the orchestra are, of course, ducks to water in this score but their reward is an unexceptional and rather squeezed sound picture.
No extras are offered but there is a readable retrospective essay by Friedrich.

It is now almost certainly the best Salome either on CD or DVD...Stratas really looks the part as well as singing it...Above all, Gotz Friedrich's production evokes the atmosphere and dramatic intensity of Strauss's opera