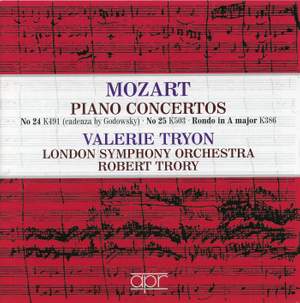 Here’s something unexpected from APR - a brand new recording of Mozart Concertos with Valerie Tryon and the LSO! To celebrate Valerie’s 75th birthday this year we have recorded her playing concertos by the composer perhaps closest to her heart, and with the LSO accompanying and the highest production values (Andrew Keener, producer & Simon Eadon, engineer) here is a disc, more than any other, which shows what a hidden treasure we have in the pianism of this neglected artist. As an added bonus for pianophiles, Valerie has given us the premiere recording of Leopold Godowsky’s cadenza to the C minor concerto. Inauthentic - without a doubt! But fascinating none the less, and those of a timid disposition can replace this with the safer Hummel cadenza which is added to the CD as an appendix. Finally, to complete this well filled disc we have the charming Rondo K386, a work which was long played wthout Mozart’s original ending which was thought lost, these missing pages recently came to light and we have recorded the most up-to-date version of this work, published in 2007.

Valerie Tryon…is… extremely impressive… offering playing of great delicacy and subtlety and moulding the operatically charged melodic lines with considerable affection. The playing in Mozart's majestic C major Concerto K503 is if anything even finer, culminating in a particularly joyous account of the Allegretto Finale. ...there is some delightful interplay between the piano and London Symphony Orchestra's woodwind in the first movement.

Tryon's legendary mastery in work such as Balakirev's Islamey and Liszt's Transcendental Etudes is here resolved in playing of a flawless taste and musicianship… Her dexterity in the finale of K503 (for some, Mozart's "Emperor" Concerto) is a marvel of refined brilliance and so too is her way with the enchanting A major Rondo, K386.

If there is a secret to performing Mozart’s piano concertos, especially the last half dozen or so, it surely lies in this kind of art that conceals art.