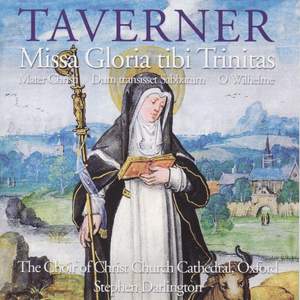 John Taverner, the most outstanding English composer of his time, was appointed Informator Choristarum of Cardinal College, Oxford in 1526, with the charge of establishing the foremost choral institution in the land. He succeeded magnificently and the tradition continues to this day at what is now known as Christ Church, Oxford, with acclaimed director Stephen Darlington, renowned for his strength in 16th century choral music, at the helm. Darlington and his forces – 16 boys and 12 men, unchanged since the 1520s – pay homage to their predecessor with a programme of his liturgical music written at Oxford. While there, Taverner had to write music to be performed virtually round the clock and he rose to the challenge using great imagination. He wrote innumerable memorable melodies, with an unprecedented emotional range and a sophisticated sense of drama. His music was astonishingly modern for its time, and in its richness remains much so today.

The Choir of Christ Church Cathedral, Oxford has a special and distinctive place within the great English choral tradition as it uniquely serves both an Oxford college and a diocese. With an unbroken, continuous tradition of glorious music-making for nearly five hundred years, today the choir is renowned for its vibrant sound and artistic versatility, qualities that have been praised throughout the world from Sydney to Rio de Janiero, Tokyo to New York, Helsinki to Paris. Apart from their Oxford duties and international tours, the Choir has been heard by millions on the Mr. Bean soundtracks and Vicar of Dibley TV theme tune.

Stephen Darlington gives majestic shape to this monumental work, effectively drawing out the imperturbable tread of the 'Gloria tibi Trinitas' cantus firmus. The choir produces a sound of blistering intensity…

The Choir of Christ Church could hardly have made a more ambitious return to recording after their valuable but variable series of Nimbus Tavener Vocal 1157 discs. Taverner's Mass is the chef d'oeuvre of the greatest composer of his time, yet it has never before been recorded by the kind of liturgical choir which he had in mind; this is a courageous and significant act of reclamation. Courageous, because Taverner's demands of phrase and melodic continuity are more subtle, but no less daunting in their own way, than those presented by Palestrina and Gombert. Performing at written pitch helps.
Stephen Darlington and his choir aren't afraid of a few dirty edges around the sound; this is a world away from the hygienic surfaces of the Gabrieli Consort or from the shapely halo of King's, Cambridge. The Christ Church trebles have a full-frontal attack to a phrase that is more commonly heard from middle-European choirs.
That makes it more susceptible to the glare of the microphone, but the recording itself dares to go in closer than Nimbus ever did. The risk largely pays off in tutti passages of startling immediacy, contrasted with more solo verse sections than is usual (to rest tired voices?). Some distended cadences leave you wondering whether they can possibly have the puff to sustain them. Sometimes they can't (at the end of the first paragraph of the Sanctus); often they can (the 'Hosanna' at the end of the famous Benedictus).
The motets are no less individual in concept and execution, including a cheeky but winning slide in Mater Christi; like the rest of the disc it will divide opinion, but it demands to be taken seriously.

Taverner's Mass is the chef d'oeuvre of the greatest composer of his time, yet it has never before been recorded by the kind of liturgical choir which he had in mind; this is a courageous and significant act of reclamation.