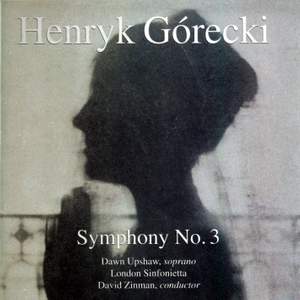 Górecki's Third Symphony has become legend. Composed in 1976, it's always had its champions and admirers within the contemporary music world, but in 1993 it found a new audience of undreamt-of... — Gramophone Classical Music Guide, 2010 More…

Górecki's Third Symphony has become legend. Composed in 1976, it's always had its champions and admirers within the contemporary music world, but in 1993 it found a new audience of undreamt-of proportions. A few weeks after its release, this Elektra Nonesuch release not only entered the top 10 in the classical charts, but was also riding high in the UK Pop Album charts. It became the biggest selling disc of music by a contemporary classical composer.
The Symphony, subtitled Symphony of Sorrowful, Songs was composed during a period when Górecki's musical style was undergoing a radical change from avant-garde serialism to a more accessible style firmly anchored to tonal traditions.
The Symphony's three elegiac movements (or 'songs') form a triptych of laments for all the innocent victims of World War II and are a reflection upon man's inhumanity to man in general. The songs are beautifully and ethereally sung by Dawn Upshaw, and David Zinman and the London Sinfonietta provide an intense and committed performance of the shimmering orchestral writing. The recording quality is excellent.

the London Sinfonietta's fine performance, beautifully recorded, is a first choice, crowned by the radiant singing of Dawn Upshaw.