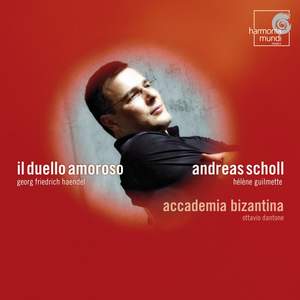 Andreas Scholl is possibly the most famous countertenor in the world. In 1998, his operatic debut at Glyndebourne in Handel's Rodelinda won unprecedented praise from the British press. His appearance on the Last Night of the Proms in 2005 awakened an entirely new audience to the countertenor phenomenon and sales of his Essential Andreas Scholl set hit the best-seller lists that Christmas. He made his debut at the New York Metropolitan Opera in 2006 and the same year won the Singer of the Year Award at the Classical Brits. Also in 2006, Andreas Scholl sang the title role in Handel's Giulio Cesare at the Théâtre des Champs-Élysées and in Rome.

The soloists of the Accademia Bizantina, all natives of the Italian peninsula, were founded in Ravenna in 1983. They are directed by Ottavio Dantone, musical director since 1996, who brings expertise in historically informed performance, leading to its position as one of today's finest Baroque groups.

"Scholl quickly demonstrated his natural ease… a limpid sound, beautifully phrased, with vibrato used sparingly. Here is a musician of obvious intelligence whose voice, in someone so young, is marvellously developed, pure and full, reminiscent of the young Alfred Deller." I wrote these words for this paper 10 years ago at Andreas Scholl's debut recital at London's Purcell Room. The promise has been abundantly fulfilled.