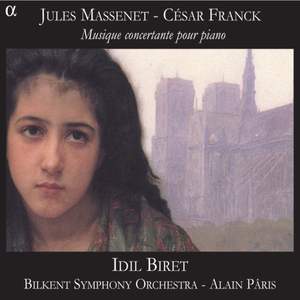 Massenet and Franck - Music for Piano and Orchestra

French music of the late 19th and early 20th century abounds in fine symphonies and concertos that are rarely explored. During the symphonic revival initiated by Camille Saint-Saëns and César Franck, several famous virtuosos encouraged composers to write new works that were to leave their mark on the repertoire. One of those musicians was the pianist Louis Diémer, for whom César Franck composed his famous Variations symphoniques. But we tend to forget that this masterpiece came into being largely thanks to the previous success of Franck's symphonic poem for piano and orchestra, based on a poem by Victor Hugo, Les Djinns. At a time when composers were trying to get away from the traditional image of music, it opened up a new path that others were to follow. Massenet's Piano Concerto represents the lesser-known side of a very great composer, who is remembered above all for his operas. It combines virtuosity and sensitivity, refinement and lyricism, not to forget the 'exotic' touch in the final movement, with the inspiration of Slovakian folk music.