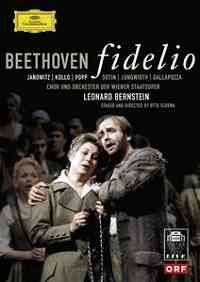 Bernstein had a special rapport with Beethoven's opera and indeed with Vienna, where Otto Schenk's 1989 production is given further conviction by a top-quality cast led by Gundula Janowitz's... — BBC Music Magazine, May 2007, 5 out of 5 stars More…

Live from the Wiener Staatsoper January 1978

Bernstein had a special rapport with Beethoven's opera and indeed with Vienna, where Otto Schenk's 1989 production is given further conviction by a top-quality cast led by Gundula Janowitz's soulful Leonore.

Bernstein conducts with all his heart – and with the occasional eccentricities as regards tempo that went with the package. By 1978 Bernstein was God in Vienna and receives here an almost too effusive welcome at start and finish. Indeed, the public applaud far too often, wrecking the end of Florestan's aria with seemingly endless clapping when all one craves is silence.
The Vienna Philharmonic play superbly for a conductor they had come to love. Otto Schenk's staging remains a marvel of sensible action, pertinent handling of the singers and clarity of action – no updating, no silly ideas, just straightforward, unobtrusive direction.
Gundula Janowitz has a lovely voice, which she uses intelligently, but her acting, as so often, is unconvincing. One never for a moment believes in her as the vulnerable, courageous rescuing wife, a fatal flaw. René Kollo sings with strength and conviction as Florestan, and acts effectively, but he does have a tendency to maul his line.
Hans Sotin as Pizarro is not half as terrifying as he could be, though he sings securely. By contrast, Manfred Jungwirth's stalwart Rocco is involved and involving. Lucia Popp offers an unforgettably moving and clearly sung Marzelline; Adolf Dallapozza is an average Jaquino.
Dialogue is cut to the minimum. Sound and video direction (by Schenk himself) are both excellent.

A performance simply crackling with excitement from the Wiener Staatsoper in 1978, conducted by Leonard Bernstein and featuring sublime performances from Gundula Janowitz as Leonore, René Kollo as Florestan, and Lucia Popp as Marzelline. The celebrated quartet, Mir ist so wunderbar, is nothing short of exquisite.