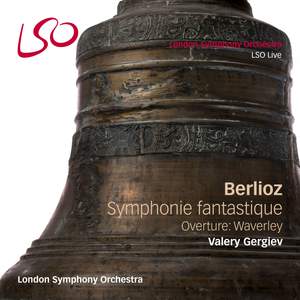 Gergiev has plenty of insights...The playing for the London Symphony Orchestra is, as so often, exceptionally refined, yet very much alive and full of colour...Under Gergiev, there is an exceptional... — BBC Music Magazine, Christmas 2014, More…

Valery Gergiev conducts the London Symphony Orchestra on the first video/audio release on LSO Live. This is the start of a much anticipated Berlioz cycle and features 'Symphonie Fantastique' & 'Overture: Waverley'.

Berlioz let his imagination run wild in his music, finding inspiration in all manner of sources, including his own turbulent personal life. His experience of powerful, unrequited love finds its expression in the emotionally charged 'Symphonie Fantastique', the story of an artist’s ‘hopeless love’, complete with waltzes, witches and a hallucinogenic nightmare.

There are few orchestras with the music of Berlioz more thoroughly in their blood than the LSO, and here Valery Gergiev brings to bear his opulent interpretation of this landmark piece.

"The March to the Scaffold’ went at a smart pace, with a chilling execution, and in an intensely dramatic ‘Dream of a Witches’ Sabbath’ the LSO, having already produced outstanding playing in the first four movements, achieved still greater heights of virtuosity, with the second violinists unusually permitted to show off their considerable paces at the front of the platform, opposite the firsts." classicalsource.com

"Gergiev came to the platform and launched a seemingly possessed LSO into some of the most thrilling Berlioz one could ever hope to hear. With utterly sincere lyricism from cor anglais Christine Pendrill alongside ear-splitting, monstrous brass fanfares, this was a performance which, whilst totally committed to Berlioz’s uncanny ideas, was just as original and brilliant as the man himself. ***** bachtrack.com

Gergiev has plenty of insights...The playing for the London Symphony Orchestra is, as so often, exceptionally refined, yet very much alive and full of colour...Under Gergiev, there is an exceptional hush to the Symphonie fantastique's opening, while moments of bombast are driven relentlessly.

Gergiev has the big picture securely in his grasp.

What matters here is that this live recording preserves personalised music-making of real distinction. If the opening movements feel a little undercooked, Gergiev's distinctive brand of theatrical intensity builds as the narrative unfolds...Bar for bar, the 'Dream of a Witches' Sabbath' is certainly more viscerally exciting and driven than Sir Colin's.

Gergiev’s impulse seems to be directed towards the last two movements, with a ‘Marche au supplice’ grim and merciless, as indeed it should be, and shrouded in the sinister quality of souind which Gergiev extracts from his players...He drives the orchestra ferociously to one of the most terrifying climaxes imaginable...a memorable performance.