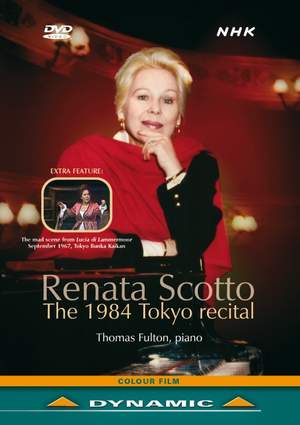 Mascagni: Scherzo for soprano and piano

Renata Scotto, one of the greatest and most famous sopranos of the post-war period, is here recorded in her full artistic maturity and, through this vast and varied programme, demonstrates her solid technique and absolutely extraordinary musicality.

The performance of this recital ended an eleven-year absence of Scotto from the Japanese stage – a return she clearly relishes as she dedicates the rare musical gems in her performance to the Tokyo audience.

Together with famous arias from renowned operas she performs some rare and neglected works, notably Edgar (Puccini’s first opera) and Sole e Amore (written before the success of La Bohème) as well as Respighi’s songs and five unpublished songs by Verdi.