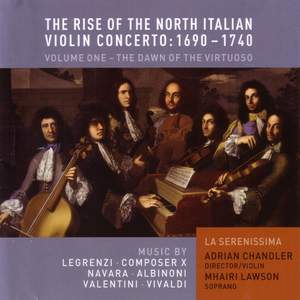 Volume One: The Dawn of the Virtuoso

It’s the late 1600s in Northern Italy. The great violin makers of Brescia and Cremona conspire with composers to satisfy a growing demand for instrumental music which reflected and in turn promoted increased technical capability of their instruments and proficiency among players. The resulting repertoire is a body of rich and virtuostic sinfonia, concerti and vocal works that influenced a generation of composers throughout continental Europe. There can be no greater modern day proponent of this output than Adrian Chandler, whose passion for the works of Vivaldi and his contemporaries shines through these virtuoso works by Albinoni, Legrenzi, Navara, Valenti, one Composer X and the Red Priest himself. Directing La Serenissima, the ensemble he founded in 1994, this is Adrian’s fourth recording for Avie and the first of three charting the development of the north Italian violin concerto between the years 1690 and 1740.

These mostly unfamiliar pieces make highly enjoyable listening, especially when played with the natural exuberance that La Serenissima bring to them. Legrenzi's dances are catchy, Navara's fleshed-out trio sonatas show off their lively violinistic style to advantage, and the Albinoni stands revealed as a neatly crafted miniature. Most interesting of all is the Valentini concerto, a rich and expansive 17-minute work full of strength and invention, including a bold five-minute fugue.