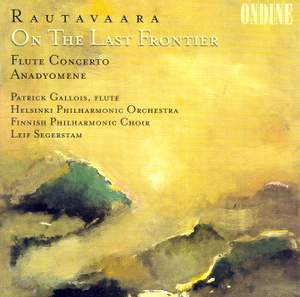 Anadyomene (1968) suggests a Turner canvas recast in sound. It opens restlessly among undulating pastels, the tone darkens further, there are brief comments from flute and bass clarinet, the... — Gramophone Classical Music Guide, 2010 More…

Rautavaara: On the Last Frontier

Anadyomene (1968) suggests a Turner canvas recast in sound. It opens restlessly among undulating pastels, the tone darkens further, there are brief comments from flute and bass clarinet, the brass prompts a swelling climax, then the mood gradually becomes more animated before we're ferried back whence we came. It's 'a homage to Aphrodite, born of the sea foam, the goddess of love', and a very appealing one at that. The colourful Flute Concerto Dances with the Winds is a more extrovert piece with Nielsen as a fairly certain forebear. It shares its material between ordinary flute, bass flute, alto flute and piccolo.
The action-packed opening movement withstands some fairly aggressive interjections from the brass, the brief second movement recalls the shrill sound world of fifes and drums; the elegiac Andante moderato offers plenty of jam for the alto flute, and the finale's striking mood-swings have just a hint of Bernsteinian exuberance.
Rautavaara's prompt for On the Last Frontier (1997) was an early encounter with The Narrativeof Arthur Gordon Pym by Edgar Allan Poe. He calls it 'a seafaring yarn in the typical boys' reading mould' and responds accordingly with a 24-minute slice of descriptive musical reportage, not of Poe's exact 'narra- tive', but of an imagined Last Frontier based on ideas from the story's closing section. It's an eventful, majestic, slow-burning tone-poem, nourished further by some distinctive instrumental solos and with telling use of a fullblown chorus.
No texts are provided, and yet the aura of unexplored maritime depths and a sense of mystery associated with them carry their own wordless narrative. All three works are expertly performed and exceptionally well recorded.