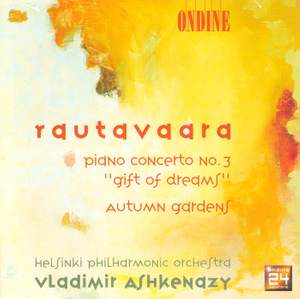 Autumn Gardens extends the Rautavaarian experience at least one step beyond the Seventh Symphony. You sense it especially in the animated finale, which begins giocoso e leggiero before a Baroque-style,... — Gramophone Classical Music Guide, 2010 More…

Autumn Gardens extends the Rautavaarian experience at least one step beyond the Seventh Symphony. You sense it especially in the animated finale, which begins giocoso e leggiero before a Baroque-style, four-note figure slowly makes its presence felt. The figure is first heard on the bassoon, then shifts timbre and focus (timpani and bells play a crucial role later on), inspiring the strings to lyrical heights. The piquantly scored first movement conjures a gentle beating of wings, with glowing modulations that sometimes darken, though they never cloud the issue. The reflective central movement follows without a break.
The Third Piano Concerto (1998) is stronger meat. More meditative than its predecessors though visited by some cluster-like dissonances, it seems to take its principal stylistic cue from the middle movement of Bartók's Second Piano Concerto. The opening string chord motive is simple, austere, the piano writing bold or decorative rather than overtly pianistic. As a whole, it's cast vaguely in the manner of Delius or Debussy, more an orchestral tone-poem with piano than a display piece. The most striking movement is the second, which incorporates some fairly harsh brass writing and memorably beautiful closing pages. The Energico finale calls in the big guns and is well served by Ondine's recording team, but one could imagine a more forceful performance. Otherwise, things go well. The disc closes with an interview, a disarmingly natural slice of dialogue where the composer relates to Ashkenazy how he views his works as received phenomena. That, for the most part, is precisely how his music sounds – like audible episodes drawn from nature, messages that, in a world seduced by banal artifice, are all too easily ignored.