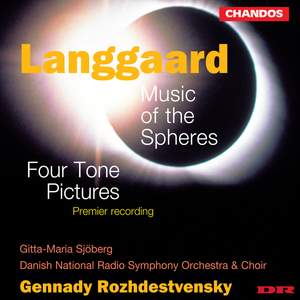 Langgaard: Music of the Spheres

Music of the Spheres (1916-18) is probably Langgaard's most important – certainly most original – work. So radical did its sonic experiments seem even in the late 1960s that Ligeti no less, when... — Gramophone Classical Music Guide, 2010 More…

I. Like sunbeams on a coffin decorated with sweet smelling flowers

II. Like the twinkling of stars in the blue sky at sunset

IV. Like the refraction of sunbeams in the waves

V. Like the twinkling of a pearl of dew in the sun on

VII. Soul of the world - Abyss - All Soul's day

XI. Glimpse of the sum through tears

XIII. The gospel of flowers - From the far distance

I. Likewords for a summer's day saga

II. A scent of mull and mud

III. A golden flake hovers above

IV. The flowering summer was linked to the harvest

Music of the Spheres (1916-18) is probably Langgaard's most important – certainly most original – work. So radical did its sonic experiments seem even in the late 1960s that Ligeti no less, when inspecting the score, quipped that he had merely been a 'Langgaard imitator' all along. The manipulation of blocks of sound rather than conventional thematic development does have much in common with trends in post-Second World War avant-garde composition (though stemming from impressionism), but other contemporaries of Langgaard's, such as Schoenberg and Scriabin, had traversed similar terrain at least in part. The main difference between Langgaard and Ligeti lies in the former's reliance on a fundamentally tonal language, however eccentrically deployed, and Music of the Spheres seems in hindsight to be a bridge between two other highly virtuosic scores with celestial connotations: Holst's The Planets and Ligeti's Atmosphères. The Tone Pictures (1917) were written alongside this extraordinary work, yet possess none of its stature: four charming songs, they seem effusive and outmoded by comparison. Chandos's sound is superb.

This is perhaps the best introduction to Langgaard's music...Rozhdestvensky with his excellent Danish orchestra captures the spirit of the music admirably, and the Chandos recording is richly atmospheric.