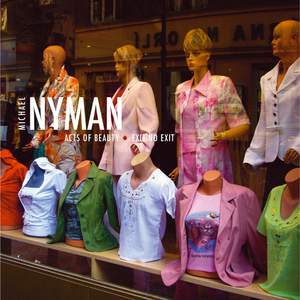 …the music… has that familiar pounding energy and strange intensity which somehow manages to be febrile and coolly detached at once. — BBC Music Magazine, September 2006, 4 out of 5 stars

Nyman: Halt, We Are Specialists

Nyman: We Are At a Film Studio

Nyman's non-operatic vocal music features on this album coupling two world premiere recordings, Acts of Beauty and Exit no Exit. Both significantly enrich the MN Records catalogue and present compelling examples of Nyman's vibrant approach to word-setting, song structure and subject matter. Acts of Beauty is a song cycle based on miscellaneous texts on beauty from a 1556 text of Vincenzo Cartari, which looks at the measurements of beauty by comparing buttocks to beauty in the urban environment as viewed by Kurt Schwitters and Dzuga Vertov to Martial's Epigrams on another kind of sexual measurement: the weighing of penis. Exit no Exit began life as Beckham Crosses, Nyman Scores, a 'homage' to the England football team as part of an extended documentary broadcast on BBC Radio 3 to celebrate the end of the World Cup finals in Japan/Korea in 2002. Nyman decided to take extracts from John Motson's commentary to the England v Argentina match and sample, loop and 'instrumentalise' them in the manner of Steve Reich's Different Trains: translating the loops repeating rhythmic and melodic patterns played without variation. Rewritten for the Shobana Jeyasingh Dance Company in 2006, John Motson's voice is now replaced with a bass clarinet which not only imitates the commentator's highly idiosyncratic speech patterns, but also takes off from these with a concertante part of some virtuosity. A completely new, multi-section closing 10-minute sequence was written specially for Exit no Exit, premiered in February 2006 at Brighton's Gardner Arts Centre. Personnel: Cristina Zavalloni (soprano), Sentieri Selvaggi, Carlo Boccadoro (conductor) (Acts of Beauty); Andrew Sparling (bass clarinet), Nyman Quartet (Exit no Exit)

…the music… has that familiar pounding energy and strange intensity which somehow manages to be febrile and coolly detached at once.