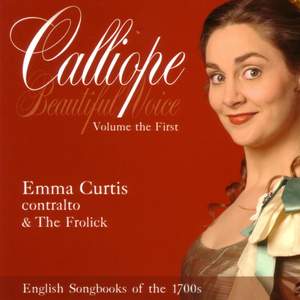 Volume The First - English Songbooks of the 1700s

Emma Curtis (contralto) with The Frolick

Across the recital Curtis employs an impressive array of expressive vocal colours. …her deepest register is outstanding when used for natural sweet singing. These diverting and entertaining... — Gramophone Magazine, November 2006 More…

Celia has a thousand Charms

Handel: A Dialogue between Punch & Columbine

Handel: A favourite Aire in Ariadne

Geminiani, F: A Song to a Favourite Minuet of Geminiani's

Handel: A favourite Aire in Alcina

Holcombe, H: The Syren of the Stage

anon.: Down the Burn Davie

Arne: The Miller of Mansfield

Galliard: Oft on the Troubled Ocean

Carey, H: The Lady’s Lamentation for the Loss of Senesino

Ramsay, A: Corn Riggs are Bonny

Martin, Jonathan: The Address to Sleep

Burgess, H: England's Lamentation for the Loss of Farinelli

Corelli: The Praise of Bacchus

Emma Curtis & The Frolick invite you back to London, 1739, for an evening of music-making at the height of Handel’s fame. Performing music from Calliope, the era’s most popular songbook, with period instruments and style, more than fifty songs from the opera, theatre, coffee-house, tavern, folk and soapbox, including A Favourite Aire by Mr. Handel in Ariadne, England’s Lamentation on the Loss of Farinelli, Maurice Greene’s The Fly, and many by Signor Animo. Calliope displays a broad and entertaining picture of 18th century London, reflecting the society for which it was collected, allowing us to see and feel the world and the humour in which its songs were born. Each song is its own microcosm of society and style.

London-born Emma Curtis is blessed with a rare, rich voice – “the most contralto Contralto I’ve heard,” according to Marilyn Horne – which couldn’t be better suited to the gender-bending theatricality of the songs on Calliope, her debut recording. Together with period-instrument ensemble The Frolick – variably mixing violin, flute, theorbo, baroque guitar, lute, cello and triple harp – she breathes life and spirit into this true discovery of the 18th century.

Across the recital Curtis employs an impressive array of expressive vocal colours. …her deepest register is outstanding when used for natural sweet singing. These diverting and entertaining songs fully deserve their new lease of life.