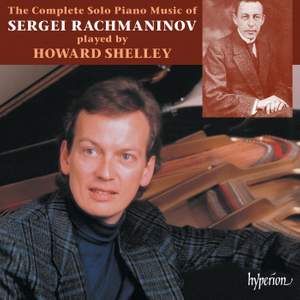 This Hyperion set is a significant testament to Howard Shelley's artistry. Pianistically impeccable, he understands what Rachmaninov was about.
The original piano works span 45 years of the composer's... — Gramophone Classical Music Guide, 2010 More…

No 1 in E flat minor. Élégie

No 4 in F sharp minor. Polichinelle

No 5 in B flat minor. Sérénade

No 02 in B flat major. Maestoso

No 04 in D major. Andante cantabile

No 06 in E flat major. Andante

No 08 in A flat major. Allegro vivace

No 1 in A minor. Nocturne

No 3 in G minor. Barcarolle

No 4 in E minor. Mélodie

No 5 in G major. Humoresque

No 6 in F minor. Romance

No 7 in D flat major. Mazurka

No 1 in B flat minor. Andantino

No 2 in E flat minor. Allegretto

No 3 in B minor. Andante cantabile

No 6 in C major. Maestoso

No 1 in F sharp minor. Romance

No 2 in E flat minor. Prelude

No 4 in D major. Gavotte

No 01 in C major. Allegro vivace

No 02 in B flat minor. Allegretto

No 03 in E major. Allegro vivace

No 06 in F minor. Allegro appassionato

No 09 in A major. Allegro moderato

No 11 in B major. Allegretto

No 12 in G sharp minor. Allegro

No 2 in C major. Allegro

No 8 in G minor. Moderato

No 9 in C sharp minor. Grave

No 1 in C minor. Allegro agitato

No 2 in A minor. Lento assai

No 4 in B minor. Allegro assai

No 5 in E flat minor. Appassionato

No 6 in A minor. Allegro

No 7 in C minor. Lento lugubre

No 8 in D minor. Allegro moderato

Variation 19 in A major. Allegro vivace

Transcription. The flight of the bumblebee

This Hyperion set is a significant testament to Howard Shelley's artistry. Pianistically impeccable, he understands what Rachmaninov was about.
The original piano works span 45 years of the composer's life. The earliest pieces here, the Nocturnes, strangely owe allegiance neither to Field nor Chopin, but are very much in the mid- to late 19th-century Russian salon style. The Third, in C minor, has nothing whatever to do with its title.
Nicely written too, but still uncharacteristic, are four pieces from 1888, which amply demonstrate that from his early teens the composer had something individual to say. The Mélodie in E major is memorable for its hypnotic use of piano tone.
Hyperion's recording quality can be heard at its very best here; there's real bloom and colour.
Written shortly after his First Piano Concerto in the early 1890s, the Morceaux de fantaisie, Op 3 bring us to familiar Rachmaninov. The ubiquitous Prelude in C sharp minor is the second number but Shelley tries to do too much with it; he's more effective in the Sérénade with its Spanish overtones.
In the E flat minor Moment musical, Op-16 one feels that he's able to master Rachmaninov's swirling accompaniments idiomatically. In Variation No 15 of the Variations on a Theme of Chopin he succeeds in bringing the notes to life, getting his fingers around the fleet scherzando writing.
The first set of Preludes is mainstream repertoire.
In the warmly expressive D-major Prelude he lends the piece a strong Brahmsian feel and it emerges as very well focused. He transforms the C minor into a restless mood picture. The First Sonata is often dismissed as being unwieldy but Shelley gives it a symphonic stature and allows it to be seen in conjunction more with the composer's orchestral writing. Shortly after the Third Concerto Rachmaninov wrote the Op 32 Preludes. Shelley conjures up an exquisite moonlit scene for the G major, but he's not as impressive in the B minor. However, with him it's always the music that dictates the course of the interpretation. In the two sets of Etudes-tableaux he excels, as he does too in the Second Sonata. He draws together the disparate elements of the finale with terrific mastery and is the equal of the 'Horowitz clones' for technique.
In the Corelli Variations he's not quite in tune with the scope of the work but is outstanding in the transcriptions, if a little straight-faced. The recorded sound is never less than serviceable and is sometimes excellent.