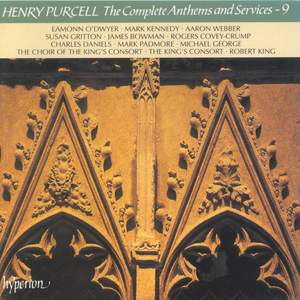 Purcell: The Lord is my light, Z55

Purcell: The Lord is King, the earth may be glad thereof, Z54

Purcell: Blessed is he whose unrighteousness is forgiven, Z8

Purcell: Blessed be the Lord my strength, Z6

Purcell: In guilty night (Saul and the Witch of Endor), Z134

All of the music on this album is also available as part of the specially priced box set Purcell: The Complete Sacred Music: It is hard to speak too highly of this enterprise  much enjoyment to be had (Gramophone).