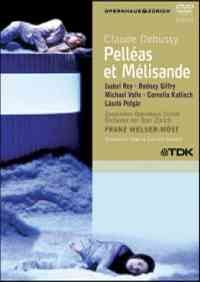 When he sings he opens a formidable treasure chest of intelligent artistry. The voice is resonant, flexible and smooth, wide in range, and he applies it with deep, searching thoughtfulness to... — Stephen Pettitt, Financial Times More…

A mysterious childlike woman, a murder by jealousy, an orphan: Debussy’s Pelléas et Méllisande, his only completed opera, is full of magical, cryptical and deeply symbolic moments. With this work Debussy added quite literally a new dimension to the 1893 stage play of the same name by Belgian playwriter and poet, Maurice Maeterlinck, who was to receive the Nobel Prize for Literature in 1911. Rodney Gilfry, a leading American opera baritone whos vocal excellence has been repeatedly extolled by many leading music critics, is Pelléas. Praised by the San Francisco Chronicle for his “rich, rolling baritone with a superb upper range,” as well as his “vivid stage presence,” Rodney Gilfry has established himself as a most compelling musician on the world’s operatic stages. By his side Isabel Rey, internationally recognised for her exquisite vocal technique and her sensitive acting skills, is Mélisande. Due to her crystal-clear soprano and the winterly stage setting the cold dream-world of the subconscious emerges to the audience. Because of the fabulous soloist and a distinguished cast this opera promises outstanding listening pleasure. Under Franz Welser-Möst’s fabulous conducting this production of the Zurich Opera House is setting musical standards. Welser-Möst is ecxeptionally talented and internationally known as one of the outstanding personalities in the field of classical music. In conjunction with the director Sven-Eric Bechtolf, he has developed into one of the leading teams in contemporary music theater.

When he sings he opens a formidable treasure chest of intelligent artistry. The voice is resonant, flexible and smooth, wide in range, and he applies it with deep, searching thoughtfulness to whatever he happens to be tackling. The baritone Rodney Gilfry is an artist of the first order.