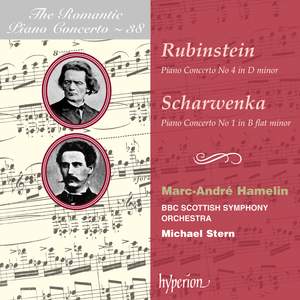 Anton Rubinstein is well served on record these days: the catalogue lists half-a-dozen versions of the Fourth Concerto… Marc-André Hamelin gives a dazzling account of this, and also of the Scharwenka... — BBC Music Magazine, October 2005 More…

Hyperions Record of the Month for Octobersurely the Romantic Piano Concerto recording of the decadewill have pianophiles the world over in raptures. These two works are undoubtedly the greatest of the forgotten concertos we have not previously tackled and have been much requested. Both were written by hugely successful virtuoso pianists who were also composers, and both had a major place in the nineteenth-century repertoire, only falling from favour in the 1920s as modernism found its place in the concert hall. There have been great recordings of each in the past so we waited until we could be sure of making superlative versions before committing them to the series. With Marc-Andres involvement this was sure to be special, and we have not been disappointedhis startling virtuosity can be taken for granted, but here there is also an adrenalin-fuelled excitement which is rarely captured in studio performances and which is guaranteed to involve even the most casual listener. Conductor Michael Stern (son of Isaac) fully enters into the spirit and does magnificent things with the BBCSSO in what is his first Hyperion recording.

Anton Rubinstein is well served on record these days: the catalogue lists half-a-dozen versions of the Fourth Concerto… Marc-André Hamelin gives a dazzling account of this, and also of the Scharwenka B flat Concerto which Earl Wild championed in the early 1970s. One of the pinnacles of Hyperion's Romantic Concerto series and strongly recommended...

Described by one respected critic as the greatest living pianist, Marc-André Hamelin soars to ever new heights of virtuosity. His phenomenal if nonchalantly deployed dexterity is matched by a cool, lyrical insight, making these performances virtually unsurpassable. Earl Wild's account of the Scharwenka, aptly described in America as 'a wing-ding of a romp', is a hard act to follow but there are few pianists of world class more adept at trumping other people's aces than Hamelin. Here it is possible to see his Scharwenka as equally dashing and razor-sharp as Wild's but with a subtler, more inclusive sense of poetry. There is never a question of virtuosity for its own sake.
Writing of Rubinstein's Fourth – and best – Piano Concerto, the august authors of TheRecord Guide once claimed that if the swelling introduction promises great things, all that emerges is a rather large mouse. But such words were written long before the advent of Hamelin, whose brilliance sets every potentially tired page alive with a truly blazing conviction. His concentrated force in the finale sweeps all before it, and he pulls out all the stops in the gloriously over-the-top conclusion.
Hamelin is superbly partnered and recorded, and lovers of lush, romantic melody embellished with hundreds and thousands of winking sequins need look no further. This extraordinary pianist now needs to be heard in the widest repertoire – not just in music's byways, however tempting and scintillating.