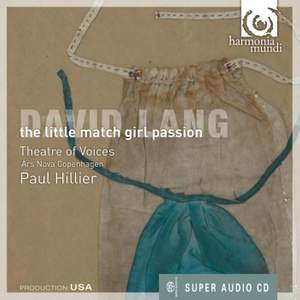 Lang's artistic voice and diction are very individual, but his writing is rich in subtle echoes… All the pieces haunt you long after the CD has ended. — BBC Music Magazine, December 2009 More…

it was terribly cold

in an old apron

have mercy, my god

she lighted another match

from the sixth hour

she again rubbed a match

when it is time for me to go

in the dawn of morning

we sit and cry

Lang, D: For Love is Strong

"What drew me to The Little Match Girl is that the strength of the story lies not in its plot but in the fact that the horror and the beauty are constantly suffused with their opposites. Andersen tells this story as a kind of parable, drawing a religious and moral equivalency between the suffering of the poor girl and the suffering of Jesus." David Lang

Co-commissioned by Carnegie Hall especially for Paul Hillier and Theatre of Voices, David Lang’s The Little Match Girl Passion was awarded the 2008 Pulitzer Prize in Music. Setting Hans Christian Andersen’s fable in the format of Bach’s St Matthew Passion, Lang elevates the suffering of the little match girl with poignant, evocative music. Lang’s piece is scored for four voices and a few percussion instruments, played by the singers.They sing the sad story of a little girl who freezes to death, selling matches on the street during a cold winter’s night. In notes Lang wrote to accompany the Carnegie Hall première last October, he says he was drawn to Andersen’s story because of how opposite aspects of the plot played off each other. “The girl’s bitter present is locked together with the sweetness of her past memories,” Lang says.“Her poverty is always suffused with her hopefulness.There’s a kind of naïve equilibrium between suffering and hope.” David Lang is one of America's most performed composers. His recent works include writing on water for London Sinfonietta, with libretto and visuals by English filmmaker Peter Greenaway; the difficulty of crossing a field - a fully staged opera for the Kronos Quartet, staged by Carey Perloff and the American Conservatory Theater; loud love songs, a concerto for the percussionist Evelyn Glennie; and the oratorio Shelter, with co-composers Michael Gordon and Julia Wolfe, at the Next Wave Festival of the Brooklyn Academy of Music, staged by Ridge Theater and featuring the Norwegian vocal ensemble Trio Mediaeval. David Lang is currently on the composition faculties of both the Yale School of Music and the Oberlin Conservatory of Music. He is also Co-Founder and Co-Artistic Director of the New York music festival Bang on a Can.

"I don't think I've ever been so moved by a new, and largely unheralded, composition as I was by David Lang's Little Match Girl Passion, which is unlike any music I know." Tim Page, Pulitzer Prize Juror

Lang's artistic voice and diction are very individual, but his writing is rich in subtle echoes… All the pieces haunt you long after the CD has ended.

…Lang looked towards Bach's St Matthew Passion as a model for setting Hans Christian Andersen's fairy-tale… This performance is a triumph for Paul Hillier's quartet of solo SATB voices, who articulate faultlessly while doubling on a miscellany of tintinnabulating percussion.

Lang's retelling of Hans Andersen's fairy tale is an entrancingly beautiful piece...What makes it so compelling is the haunting vocal writing.