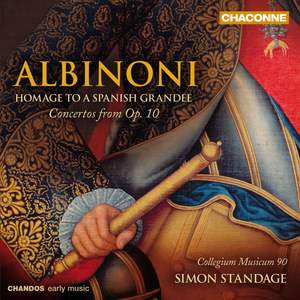 Albinoni - Homage to a Spanish Grandee

In this latest recording of works by Albinoni, Simon Standage directs Collegium Musicum 90 showcasing the rarely performed and recorded Op. 10 Concertos. As late as 1961, academics were unaware of Albinoni’s last set of concertos. All this changed when two small private collections were found to contain the print. Since then, the existence of Op.10 has been known to scholars, but awareness of it and curiosity about it has not really penetrated. Most of the Op.10 concertos have not been published in a modern edition, and the set has been recorded only twice before.

The dedicatee of Op. 10 was the Marquis of Castelar, Don Luca Fernando Patiño, who had come to Italy from Spain as a military commander. As a result, the Op.10 concertos are highly individual. If one looks at the melodic lines in isolation, they look full modern for the 1730s, but if one looks at the bass line they go right back to the time of Albinoni’s Op.2 and Op.5. Albinoni alludes to the dedicatee in the music itself: the first movement of Concerto 11 is a vivid evocation of flamenco style, with all its fierce percussiveness. Note writer Michael Talbot describes the concertos as ‘undoubtedly ‘odd’ in the fact that they are wildly different from what one expects from any composer working in the 1730s, but they are also beautiful in a way absolutely peculiar to their composer and in a way a logical conclusion of his art.’

Simon Standage performs regularly with Collegium Musicum 90 and other groups and is a very well respected performer in the early-music field.

The playing is fresh and lively

No one needs question the artistic probity of Collegium Musicum 90 led by Simon Standage. He rarely adds decorations to his part, yet the performances...are of a spirit, delicacy and awareness of fine distinctions in tone colour and phrasing that communicate the ethos of these concertos.

Standage...drives the music along briskly, avoiding any sense of self-indulgence in the slower movements and ready to skip and dance whenever the music, as it so often does, turns into something light and lively.