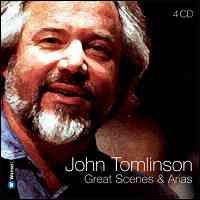 Great Scenes & Arias from Mozart, Wagner, and others

…a generous offering to an artist whose own largesse, of voice and personality, has won him over many years now a special place in the affection of music lovers, particularly in his native country. — Gramophone Magazine, Awards Issue 2005 More…

A bass baritone in the forefront of his profession, John Tomlinson is a singer and actor with tremendous vocal and stage presence regularly in demand for his portrayals of some of the most demanding roles in opera today. In a career that has lasted over three decades, he has performed with Glyndebourne Opera, Kent Opera, the New Opera Company at Sadler’s Wells, the Royal Opera House, Covent Garden and English National Opera, with whom he has had a 25-year association and performed 50 roles. Internationally, Tomlinson has made important appearances at San Francisco Opera, San Diego Opera, L’Opéra de Paris, the Salzburg Easter Festival, Deutsche Oper, Berlin Staatsoper, and at the opera houses of Munich, Dresden and Vienna.

In 1988, John Tomlinson starred in Harry Kupfer’s new production of Der Ring des Nibelungen at the Bayreuth Festival with Daniel Barenboim conducting. It was with these performances that Tomlinson firmly established himself as the greatest living interpreter of Wotan (in Das Rheingold and Die Walküre) and of the Wanderer (in Siegfried) - these roles present what are generally regarded as being among the greatest vocal challenges in the entire operatic repertoire. He has sung at Bayreuth every year since.

…a generous offering to an artist whose own largesse, of voice and personality, has won him over many years now a special place in the affection of music lovers, particularly in his native country.