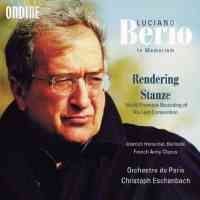 …the novelty on the Ondine disc is the recording, taken from… Berio's final work, completed just a few weeks before his death… Stanze… is as much a conscious leave-taking as Mahler's Das Lied... — BBC Music Magazine, September 2005, 4 out of 5 stars More…

…the novelty on the Ondine disc is the recording, taken from… Berio's final work, completed just a few weeks before his death… Stanze… is as much a conscious leave-taking as Mahler's Das Lied von der Erde… It's bleakly beautiful and Eschenbach and his soloist Dietrich Henschel catch the tone perfectly.

Stanze, a sequence of five songs for baritone, male chorus and orchestra, was Berio's last completed work, premiered after his death in 2003.
Though the title is Italian – and means 'rooms', not 'verses', indicating the distinct character of each individual movement – only the texts for movements two and three are in that language.
The third movement sets an English version of a whimsical poem by Alfred Brendel and the outer movements are both to German texts – the first Paul Celan's Tenebrae, the last translated from the Hebrew of Dan Pagis.
The movements are indeed diverse and it could be that, after hearing them, Berio would have had second thoughts, if not about the order then about some details of the balance between voice and orchestra. Even the admirable Dietrich Henschel has difficulty adhering to the dynamics as marked in the score – perhaps he should have been more forwardly balanced. But this is a live recording of the premiere. Given the work's importance, it's a pity that it couldn't have been taken into the studio and worked on more intensively. Yet this Ondine release captures the emotional power of a special occasion, all five movements coloured by the brooding atmosphere established at the outset in Celan's great threnody.
Christoph Eschenbach has recorded Rendering before and although his new reading of Berio's idiosyncratic filling-out of the sketches for Schubert's Tenth Symphony is excellent in its way, it seems a pity that a different and more substantial orchestral work, not otherwise available, couldn't have been included instead.

Dietrich Henschel's performance is extraordinary, one of the most impressive vocal displays to come along in many a moon. ... Billed as "Luciano Berio: In Memoriam", this disc offers an ideal tribute to a major figure in 20th century music.