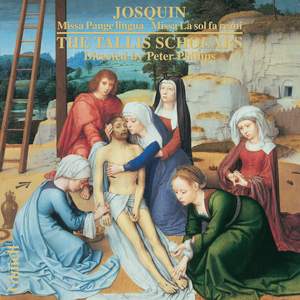 This is absolutely superb. We must accept that Josquin is unlikely to have heard this music with two women on the top line, but they do it so well that only a fundamentalist would mark the disc... — Gramophone Classical Music Guide, 2010 More…

This is absolutely superb. We must accept that Josquin is unlikely to have heard this music with two women on the top line, but they do it so well that only a fundamentalist would mark the disc down for that. It should also be said that the least successful performance on the entire disc is in the opening Kyrie of this Mass where there's a certain brutality in the approach; and although The Tallis Scholars make much of the 'Benedictus' and the last Agnus Dei, there may still be better ways of doing it. On the other hand, as just one example among many, these were the first musicians to make the 'Osanna' truly successful and understand why Josquin should have chosen to compose it that way. But they sing even better in the Mass, La sol fa re mi. Again and again in the singing one has the feeling that Josquin's lines are projected with an understanding and clarity that have rarely been heard before. The La sol fare mi of the title denotes (among other things) the melodic passage which appears over 200 times in the course of the work with its intervals unchanged – which may not seem a recipe for the kind of music one would want to hear. But Josquin treats his material with such astonishing sophistication that you're rarely aware of the melodic fragment as such; and Phillips is scrupulously careful never to emphasise the melody except in places – such as the end of the second 'Osanna' – where it's clearly intended to work as an ostinato. This performance shows that the Lasol fa re mi belongs with the greatest works of its era.

The performances of these two Masses are absolutely superb. The dedication, discipline and skill required to produce such immaculate singing is quite remarkable...Even now, more than 25 years later, it still sounds fresh and new-minted.