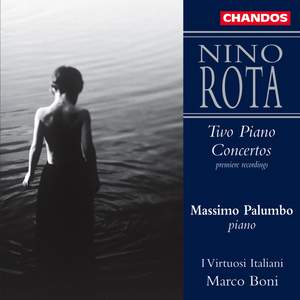 Both these works are unashamedly Romantic and nostalgic in style. The E minor Piano Concerto was composed in 1960, at the same time as Rota's music for Fellini's film La dolce vita. As if in... — Gramophone Classical Music Guide, 2010 More…

Both these works are unashamedly Romantic and nostalgic in style. The E minor Piano Concerto was composed in 1960, at the same time as Rota's music for Fellini's film La dolce vita. As if in answer to the extreme cynicism of that and much of his other film music, the concerto seems to be a questioning exploration of the remaining possibilities in a modern, Romantic form. The opening Allegro-tranquillo movement begins with a dreamlike theme on the piano which is then taken up by the orchestra and developed as a sort of conversation – the orchestra insisting on a heroic, almost martial sound, while the piano and woodwind reiterate the original soft mood. The first movement is over 16 minutes: away from the rule of the film-editor's stop-watch Rota felt free to indulge himself. The same four-note figure that runs through the opening is taken up in the second movement, a quiet, slow section with a haunting intensity. The finale continues the awake-in-a-dream contrasts.
Rota composed four piano concertos, but the date of the one in C major seems to be in doubt.
It's earlier than 1960, and is a sparer, jauntier work, in mood more reminiscent of the 1920s.
It, too, presents a dialogue between the questlike piano part and the orchestra asserting a darker mood.
Both concertos are played by Massimo Palumbo with brilliant technique; the recorded sound is excellent.