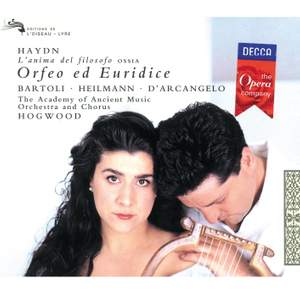 Christopher Hogwood builds his band on the model of those prevalent in late 18th-century London theatres. Not only does his phrasing and articulation discover no end of witty and poignant nuances,... — Gramophone Classical Music Guide, 2010 More…

Costanza a me si chiede?

Christopher Hogwood builds his band on the model of those prevalent in late 18th-century London theatres. Not only does his phrasing and articulation discover no end of witty and poignant nuances, but the grave austerity of the string playing, and the plangency of the early woodwind instruments are eloquent advocates of an opera whose uncompromisingly tragic ending owes more to Ovid and Milton than to operatic tradition. Hogwood also remembers that Haydn was writing for a Handelian London choral tradition: his chorus, be they cast as Cupids, Shades or Furies, have robust presence, and sculpt their lines with firm muscle.
Cecilia Bartoli takes the role of Euridice. In her very first aria, 'Filomena abbandonata', she understands and eagerly re-creates the type of coloratura writing which simultaneously fleshes out the central nightingale simile and incarnates the single word 'crudeltà'. Her unmistakable, melting half-voice comes into its own as emotion first clouds reason, only to create the fatal emotional extremes to which she gives voice so thrillingly. Uwe Heilmann is just the tenor of rare agility and wide vocal range vital for this particular Orfeo. The minor parts are strongly profiled: d'Arcangelo is a stern, noble Creonte, Silvestrelli a fearsome, stentorian Pluto – and there's even a convincing strepito ostile off-stage as Euridice's abduction is attempted in Act 2.
Beyond the detail, it's the poignancy of the musical drama at the heart of this strange, grave Orfeo which Hogwood reveals with such sympathetic and imaginative insight.