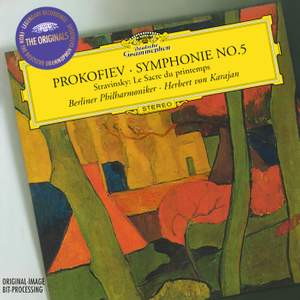 Prokofiev: Symphony No. 5 & Stravinsky: The Rite of Spring

Karajan's 1968 Prokofiev Fifth is a great performance.
Whenever one compares it with later versions inevitably the DG account holds its place at the top of the list. The analogue recording was... — Gramophone Classical Music Guide, 2010 More…

Stravinsky: The Rite of Spring: Adoration of the Earth

Adoration of the Earth

Karajan's 1968 Prokofiev Fifth is a great performance.
Whenever one compares it with later versions inevitably the DG account holds its place at the top of the list. The analogue recording was uncommonly good for its time.
With the advantage of the Jesus-Christus Kirche acoustics, the sound is full and spacious, naturally defined and balanced; there's a slightly leonine quality to the strings and a natural bloom on woodwind and brass. Karajan lived with the work for a decade before he recorded it and this is immediately apparent in the way the first movement unfolds so inevitably.
The ironic opening of the Scherzo with its flawless BPO articulation brings a splendid but unexaggerated bite, and in the more lyrical central section every subtle detail of colour comes over. The passionate string threnody of the Adagio (what playing, what intensity!) is superbly underpinned by darker wind murmurings; the tangibly hushed close leads naturally to the mellower opening of the essentially upbeat finale with its throbbing horns and instant echoes of Romeo and Juliet.
Karajan's Rite of Spring came a decade later and is more controversial. Stravinsky had been sarcastically scathing about the conductor's earlier 1964 account, even describing one section as 'tempo di hoochie-koochie'. So, Karajan let the work rest, and when he re-recorded it in January 1977 it was done in one single uninterrupted take.
The result has less visceral excitement than some but it's still very rewarding, combining both the symphonic and balletic aspects of this extraordinary score, with the BPO providing much sheer beauty of sound, as in the ravishing melancholy of the opening of Part II and the haunting 'Evocation des ancêtres', although other versions find more pungent drama when the horns enter later.
The Philharmonie sound is excellent and both CD transfers are expertly managed to retain the full character of the originals.