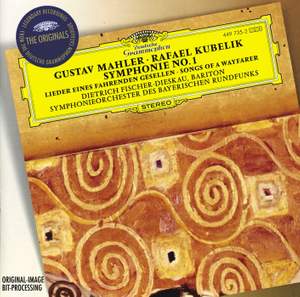 Rafael Kubelík is essentially a poetic conductor and he gets more poetry out of this symphony than almost any other conductor who has recorded it. Although he takes the repeat of the first movement's... — Gramophone Classical Music Guide, 2010 More…

Rafael Kubelík is essentially a poetic conductor and he gets more poetry out of this symphony than almost any other conductor who has recorded it. Although he takes the repeat of the first movement's short exposition, it's strange that he should ignore the single repeat sign in the Ländler when he seems so at ease with the music.
Notwithstanding a fondness for generally brisk tempos in Mahler, Kubelík is never afraid of rubato here, above all in his very personally inflected account of the slow movement. This remains a delight. The finale now seems sonically a little thin, with the trumpets made to sound rather hard-pressed and the final climax failing to open out as it can in more modern recordings.
The orchestral contribution is very good even if absolute precision isn't guaranteed.
Dietrich Fischer-Dieskau's second recording of the Lieder eines fahrenden Gesellen has worn rather less well, the spontaneous ardour of his earlier performance (with Furtwängler and the Philharmonia) here tending to stiffen into melodrama and mannerism. There's much beautiful singing, and he's most attentively accompanied, but the third song, 'Ich hab' ein glühend Messer', is implausibly overwrought, bordering on self-parody. By contrast, Kubelík's unpretentious, Bohemian approach to the symphony remains perfectly valid. A corrective to the grander visions of those who conduct the music with the benefit of hindsight and the advantages of digital technology? Perhaps.