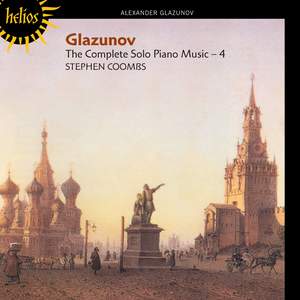 This recording is the fourth and final disc in Stephen Coombs's edition of all Glazunov's music for solo piano. The main work featured is the Sonata No 2: it is formidably challenging. The first movement is passionate, with lush harmonies and polyphonic interest. The Scherzo second movement is the most technically demanding and has been described by Leslie Howard as 'a treacherous study in double notes in no way relieved by the faster toccata of the trio section'. Also included are many of the smaller-scale works, notable among which is the Triumphal March on the occasion of the World's Columbian Exposition in Chicago, Op 40. This piece, lasting some ten minutes, brings the listener something of a surprise when, two minutes from the end, a large chorus (here, the Holst Singersand also the two 'Executive Producers' from Hyperion!) joins the solo piano for a quick romp (in Russian) in praise of Columbus