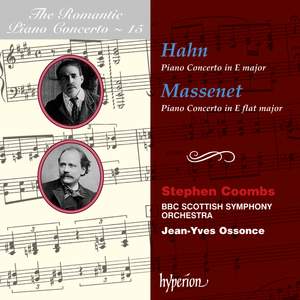 The Romantic Piano Concerto Series goes French for this recording of the single examples in the genre by Massenet and his pupil Hahn. Both works were written towards the end of their composers' careers and mark a return to the piano for each of them; the piano had originally been the first instrument of both, but opera and the voice had occupied them for most of their lives. Although both concertos owe a debt to the lean and athletic piano style exemplified by Saint-Saens, they are very different in character. The Massenet is an extrovert work culminating in a very Lisztian 'Hungarian' finale, while the Hahn is primarily lyrical and gentle, the composer's gifts as a composer of songs easily transferring to the concerto medium.