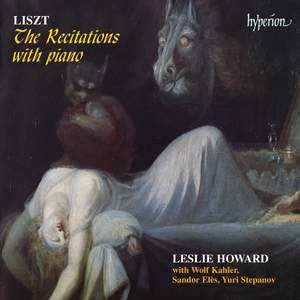 Liszt Complete Music for Solo Piano 41: The Recitations with pianoforte

A real curiosity and a valuable one — Gramophone Magazine

Solo Instrumental or Spoken Word? The genre of the melodrama finds little place amid modern cataloguing demands, yet was a particular favourite in the nineteenth century, with examples by Schubert and Richard Strauss, among many others. On this recording Liszt's five surviving such works cover a wide range of human emotion and experience: the despairing fidelity of Lenore which leads her to irreversible blasphemy; the fatal haunting of the once-fearless knight confronted by a ghostly monk; the dead King who remains faithful to his Sigrun even amid the delights of heaven; the widow wooed by a mysterious apparation; and Tolstoy's blind musician, too devoted to his song to care when he performs without the intended audience.

These ballads, recited in their original languages (three German, one each Hungarian and Russian—full texts and translations into English, French and, where applicable, German provided), are accompanied and adorned by Liszt's expressive piano parts, Der traurige Mönch being of particular interest as an early example of the true atonality which Liszt was not to develop upon for many years.

This latest volume in Leslie Howard's gargantuan survey of Liszt's piano music certainly stands out from the others.

A real curiosity and a valuable one