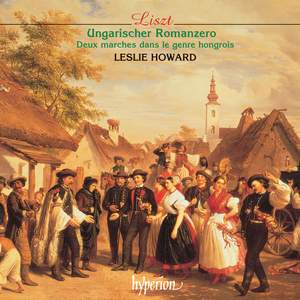 These arrangements are quite elaborate and charming — Classic CD

Most Liszt catalogues fail to mention an important unpublished manuscript which is lodged in the Richard Wagner Museum in Bayreuth: a volume of Hungarian dance melodies arranged for the piano with varying degrees of harmonization, extension and elaboration. The pieces are based on music by several known and unknown composers of Hungarian light music– effectively dance-band 'standards' of the day. Liszt's manuscript consists of eighteen pieces, some of which are quite fully worked out, even though there are almost no markings of tempo, phrasing, fingering, pedalling, dynamics or other indications of touch. The title Ungarischer Romanzero, using a Spanish word to describe Hungarian melodies, signifies merely 'collection of Hungarian songs'. Many of the pieces are complete in the sense that, with a little imagination in terms of tempo and style, they may be played as they stand. Some contain notes written to remind Liszt how to proceed, and many of these continued figurations and varied reprises can be postulated without too much fear of undue liberty. The Deux marches dans le genre hongrois come from an untitled manuscript from Weimar which was published by the Liszt Society in 1954. They were composed at some point around 1840, and thus are roughly contemporary with the Marche héroïque dans le genre hongrois (Heroischer Marsch im ungarischen Styl), and they bear obvious musical kinship to that imposing work.

These arrangements are quite elaborate and charming