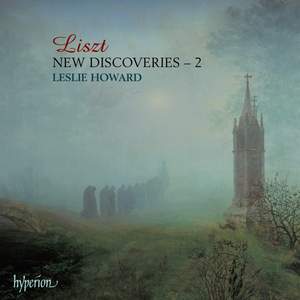 I. [untitled] in E flat major

VI. Attente, in A major

As was remarked in the first supplementary volume to the Hyperion Liszt Series (CDA67346), there was an understanding that new discoveries would be issued from time to time; research into manuscript holdings in various libraries has revealed that works which were first thought to be rough sketches are in fact playable, virtually completed pieces. The Sketchbook N5, held in the Goethe- und Schiller-Archiv in Weimar, contains complete drafts and sketches to a number of such works, including a set of eight pieces presented here under the title Préludes et Harmonies poétiques et religieuses (given in brackets by Liszt) in order to avoid confusion with the single piece of 1833–4 of similar name. This is not so much an early version of the famous Harmonies poétiques et religieuses as a set of eight early works whose themes were to crop up variously across a range of later compositions. With the Concerto sans orchestre we are probably dealing with the first complete version of the piece which would eventually become Concerto No 2; the musical material will be familiar, though almost all of the textures were greatly altered over the years. The things immediately apparent are the work’s originality and freshness – qualities which Liszt managed to retain through all the revisions – and that this is already a splendid work in its own right. The Album-Leaf: Magyar in B flat minor was composed for Ignaz Moscheles, and its musical material is almost identical to part of the eleventh of the Magyar Dalok. The Ungarischer Marsch in B flat has remained unpublished, and although the manuscript contains suggestions of instrumentation, no orchestral score of the piece has come to light. Pensées again comes from Sketchbook N5, the only completed work in its final pages, and is a little gem dating from late in 1845. Album-Leaves by Liszt continue to turn up at auction or on odd pages amongst collections; four of these are presented here. The familiar piano version of the song O lieb, so lang du lieben kannst! remains Liszt’s best-loved melody: the third of the Liebesträume. But that transcription differs considerably from the song, and the piece has been conjecturally reconstructed here from a variety of sources.

his stylistic understanding is always impeccable, and as recorded here his Steinway makes a warmly appealing sound

Leslie Howard is once again an ardent and reflective champion in both his playing and in his brilliantly informative essay; he also promises further discoveries. Hyperion's sound and presentation is immaculate as ever

So we learn more about this extraordinary composer, thanks to that rare combination of Howard's scholarly musicianship … and fearless keyboard technique, allied to the ongoing commitment of Hyperion Records - without which the entire musical world would be so much the poorer