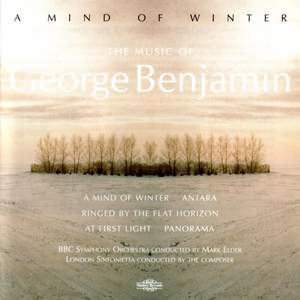 A Mind of Winter - The Music of George Benjamin

Between March 1979, when Ringed by the flathorizon was begun, and March 1987, when Antara was completed, foundations of remarkable potential were well and truly laid, and it's fascinating to... — Gramophone Classical Music Guide, 2010 More…

Benjamin, G: A Mind of Winter

Between March 1979, when Ringed by the flathorizon was begun, and March 1987, when Antara was completed, foundations of remarkable potential were well and truly laid, and it's fascinating to be able to trace that process through four such different George Benjamin works. There are, of course, five items on the disc, but the 2'24" of Panorama – a beguiling, all-too-brief indication of Benjamin's work using pre-recorded tape – form a study for Antara rather than a wholly independent conception.
The overall impression is certainly one of progress, in that the accomplished but in some ways rather stiff procedures to be heard in Ringed by the flat horizon led directly to the magnificently fluent setting of Wallace Stevens in A Mind of Winter, in which lucid instrumental textures provide the ideal foil for a brilliantly resourceful vocal line. In At first light, the stylistic spectrum opens up further, with clear hints of Varèse and even Xenakis. This disc is an essential document of the music of our time.

One is never left in doubt as to the intentions which lie behind the music. The various performers do sterling work in communicating these intentions to the listener, but the palm must go to the BBC orchestra under Elder who are superlative in Ringed by the flat horizon.