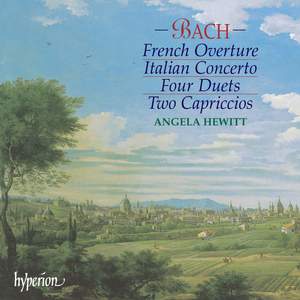 Here is an attractive recital of five varied pieces or suites of pieces, familiar and not so familiar, played with Hewitt's expected intelligence and finish and not a little verve. In her very... — Gramophone Classical Music Guide, 2010 More…

Angela Hewitt's recordings of J S Bach's keyboard works are rapidly being seen as the definitive modern survey on the piano. Such is her natural affinity for Bach's style, her aliveness to his dancing rhythms and her sensitive use of the modern instrument, that she is the natural successor to a prestigious line of great Bach pianists. This disc includes works from the second and third volumes of Bach's Clavierübung (Keyboard Practice). In the Italian Concerto and French Overture Bach demonstrates not only his skill as translating to the keyboard two of the most popular orchestral genres of the time, but also his natural assimilation of their respective national characteristics, while remaining true to his own style. These are among his happiest inspirations. The Italian Concerto brims with joyous thematic invention and allusions to solo and orchestral contrasts, while the French Overture (often called a Partita) is a lively dance suite. The Four Duets, rather like more mature Two-part Inventions, and the youthful Capriccios complete a sunny and inspirational disc.

Here is an attractive recital of five varied pieces or suites of pieces, familiar and not so familiar, played with Hewitt's expected intelligence and finish and not a little verve. In her very readable introduction, Hewitt quotes a contemporary review of the Italian Concerto describing Bach not only as a great master but as someone 'who has almost alone taken possession of the clavier', and whose compositions are exceedingly difficult to play 'because the efficiency of his own limbs sets his standards'.
They still are, and Hewitt conveys the feeling that the challenges aren't just to be met but should be sensed as integral to successful performance.
By giving the quick numbers plenty of pace she makes the music sound difficult in the right way. No question of hustling them along, but rather of touching the core of the rhythmic energy and of making all the lines, throughout the texture, directional and lively.
Hewitt's isn't a monumental Bach, rooted to the spot, but one that makes us curious as to what lies around the next corner. The brilliant outer movements of the Italian Concerto, the long fugal section of the French Overture, the second and fourth of the Duets (those extraordinary studies in two-part writing) are all successes of her musical dynamic and high-stepping style. And the Echo movement of the French Overture (track 28) has a positively theatrical allure, like something out of Rameau – wonderful! What she can't disguise, however, is that some of the movements in this great suite 'in the French style' lie uneasily on the piano, especially when the sonorities characteristic of a two- manual harpsichord are transcribed as if for a piano without sustaining pedal. If only she'd allow herself a dab of it now and then; the music needs to hang in the air a bit, and the 18th- century harpsichord was, after all, an instrument of mass as well as point, richer in colour and weight of sound than Hewitt's pencil-lines and sometimes rather brittle and over-articulated manner suggest.
On the other hand, her characterisation of the two early Capriccios in terms of the modern piano is a tour de force – sparky, fresh, as if improvised.
The greatness of the rest of the music here may put them in the shade, a little, but they're delightful. Bach aged 17, trying his hand at programme music? Well, the Capriccio 'on the departure of his beloved brother' remained his only example of it, but it's a reminder too that there was nothing he couldn't do. A stimulating disc, and beautiful sound.