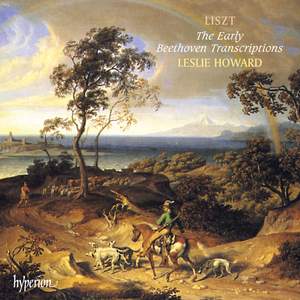 One can only marvel at Leslie Howard's tireless advocacy of Liszt, and the way he constantly overcomes the multitude of technical obstacles in his path — Gramophone Magazine

Liszt: Cadenza for the 1st movement of Beethoven's Piano Concerto No. 3, S389a

First to allay fears of any duplication of material with Leslie Howard's previous release of Liszt's transcriptions of the Beethoven symphonies (CDA66671/5): these early transcriptions were made more than twenty years before their revisions, and Liszt's approach was originally even more demanding upon the performer. His earlier thoughts emerge as more dramatic and present many different solutions to the problems of faithfully transcribing great masterpieces. A comparison of the versions is fascinating and revealing, both for our knowledge of Liszt and his art and for the many insights into Beethoven himself which Liszt offers. The disc also includes the only piano transcription attempted by Beethoven of one of his own symphonies. Not strictly within the remit of this series perhaps, but this miniature is included not only to demonstrate Beethoven's approval for such an endeavour, but also to show exactly how masterful is Liszt's handling of the problems faced – his transcriptions are by far the more faithful!

One can only marvel at Leslie Howard's tireless advocacy of Liszt, and the way he constantly overcomes the multitude of technical obstacles in his path