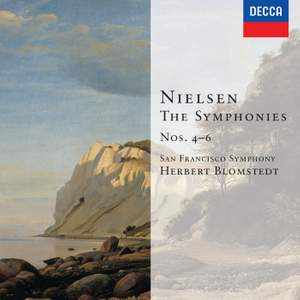 The Fourth and Fifth are two of Nielsen's most popular and deeply characteristic symphonies.
Blomstedt's are splendid performances. The Fourth occupied Nielsen between 1914 and early 1916 and... — Gramophone Classical Music Guide, 2010 More…

Nielsen: Little Suite in A minor for strings, Op. 1 (FS6)

The Fourth and Fifth are two of Nielsen's most popular and deeply characteristic symphonies.
Blomstedt's are splendid performances. The Fourth occupied Nielsen between 1914 and early 1916 and reveals a level of violence new to his art.
The landscape is harsher; the melodic lines soar in a more anguished and intense fashion (in the case of the remarkable slow movement, 'like the eagle riding on the wind', to use Nielsen's own simile). Blomstedt's opening has splendid fire and he isn't frightened of letting things rip. The finale with its exhilarating dialogue between the two timpanists comes off splendidly.
The Fifth Symphony of 1922 is impressive, too: it starts perfectly and has just the right glacial atmosphere. The climax and the desolate clarinet peroration into which it dissolves are well handled. The recording balance couldn't be improved upon: the woodwind are well recessed (though clarinet keys are audible at times), there's an almost ideal relationship between the various sections of the orchestra and a thoroughly realistic overall perspective.
Blomstedt's account of the Sixth Symphony is a powerful one, with plenty of intensity and an appreciation of its extraordinary vision. It's by far the most challenging of the cycle and inhabits a very different world from early Nielsen.
The intervening years had seen the cataclysmic events of the First World War and Nielsen was suffering increasingly from ill health. Blomstedt and the fine San Fransisco orchestra convey the powerful nervous tension of the first movement and the depth of the third, the Proposta seria.

an admirable and inexpensive way of collecting Blomstedt's complete cycle of Nielsen's symphonies which is self-recommending. All six performances are among the finest available...To put it briefly, this remains the best all-round modern set of the symphonies, and the bonuses add to its attractions.