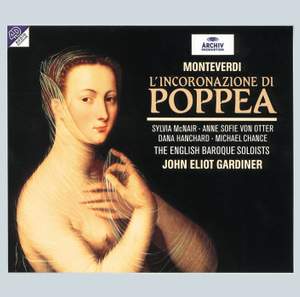 The central question was always about how much needs to be added to the surviving notes in order to make Poppea viable on stage. Gardiner and his advisers believe that nothing needs adding and... — Gramophone Classical Music Guide, 2010 More…

The central question was always about how much needs to be added to the surviving notes in order to make Poppea viable on stage. Gardiner and his advisers believe that nothing needs adding and that the 'orchestra' played only when explicitly notated in the score and was a very small group.
To some ears this will have a fairly ascetic effect, but it's firmly in line with current scholarly thinking.
To compensate, there's a rich group of continuo players who play with wonderful flexibility.
And Gardiner's spacious reading of the score bursts with the variety of pace you might expect from a seasoned conductor of early opera. Sylvia McNair is a gloriously sensuous Poppea: from her sleepy first words to the final duet she's always a thoroughly devious character, with her breathy, come-hither tones. Complementing this is Dana Hanchard's angry-brat Nerone, less even in voice than one might hope, but dramatically powerful nevertheless. Whether they quite challenge Helen Donath and Elisabeth Söderström for Harnoncourt is a matter of opinion, but they certainly offer a viable alternative.
The strongest performances here, though, come from Michael Chance and Anne Sofie von Otter as Ottone and Ottavia, both of them offering superbly rounded portrayals. Again they face severe challenges from Harnoncourt's unforgettable Paul Esswood and Cathy Berberian, but here the challenge is more equal. Francesco Ellero d'Artegna is perhaps the most vocally skilled Seneca to date.
The fact that this was recorded at a public concert is noticeable only occasionally.

a purposeful, strongly characterized performance...Sylvia McNair is a seductive Poppea and Anne Sofie von Otter a deeply moving Ottavia, both singing ravishingly...in the sensuous duet which closes the opera, the clashing intervals of the voices are given a degree of abrasiveness, suggesting that, though this is a happy and beautiful ending, the characters still have their sinister side.