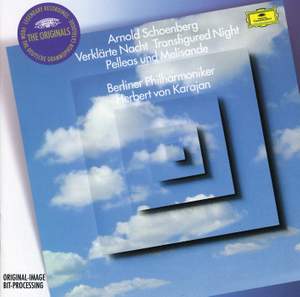 This is a very distinguished coupling, superbly played by the BPO – a truly 'legendary' reissue, quite unsurpassed on record. Karajan never approached contemporary music with the innate radicalism... — Gramophone Classical Music Guide, 2010 More…

I. Grave (Arr. for String Orchestra by Schoenberg - 1943 Revised Version)

This is a very distinguished coupling, superbly played by the BPO – a truly 'legendary' reissue, quite unsurpassed on record. Karajan never approached contemporary music with the innate radicalism and inside knowledge of a composer-conductor like Boulez; yet he can't be accused of distorting reality by casting a pall of late-Romantic opulence and languor over these works. He's understandably most at home in the expansive and often openly tragic atmosphere of Schoenberg's early tone-poems Verklärte Nacht and Pelleas und Melisande. The richly blended playing of the BPO provides the ideal medium for Karajan's seamless projection of structure and expression. He remains especially sensitive to the music's lyricism, to the connections that to his ears override the contrasts.
Although Verklärte Nacht has certainly been heard in performances less redolent of 19th-century tradition, as well as less calculated in its recorded acoustic, this remains a powerfully dramatic reading. One man's view, then: but, given the man, a notably fascinating one.

They have never been presented as ravishingly as by Karajan and the Berlin Philharmonic on this splendidly recorded disc.