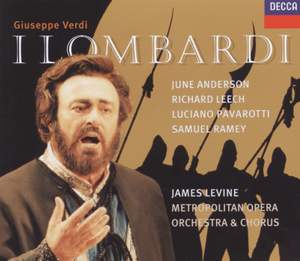 Pavarotti appeared at the Met production of ILombardi in 1993: this recording is the delayed result. He's in good voice and sings Oronte's aria with fine legato, binding the decorative turns... — Gramophone Classical Music Guide, 2010 More…

Pavarotti appeared at the Met production of ILombardi in 1993: this recording is the delayed result. He's in good voice and sings Oronte's aria with fine legato, binding the decorative turns of the cabaletta beautifully into the vocal line and throwing in a respectable top C to show us he still can. I Lombardi is a viscerally exciting opera. The first complete recording, conducted by Lamberto Gardelli (Philips), set a good benchmark in 1972, but that need not deter us from welcoming this lively newcomer. The Met Opera Orchestra plays with splendid precision and, as Turks and Crusaders, women of the harem and virgins, the Met Chorus has a high old time on both sides of ILombardi's war-zone. Levine himself has improved beyond recognition as a Verdian; this studio recording is well paced and has a good sense of theatre. Everything is swift and crisp.
The best role goes to the soprano Giselda, specially tailored for the delicate skills of Erminia Frezzolini. Among the current crop of Verdi sopranos, June Anderson is probably as plausible a modern Frezzolini as any. There's some lovely, pure-toned singing in her big scene at the end of Act 2 and her coloratura is shining bright, both in this cabaletta and later in 'In fondo all' alma'.
Samuel Ramey makes a relatively lightweight Pagano, who alone decorates his second verses. In the second tenor role Richard Leech holds his own, although his voice doesn't take well to the microphone. Ildebrando d'Arcangelo proudly represents the younger generation of Italian singers in the small role of Pirro, and Patricia Racette sings brightly as Viclinda.
Gardelli's crusading first recording has a rough Italianate vigour that lovers of early Verdi will enjoy, but Levine and his forces more than hold their ground with pace and brilliance, and a bright, modern recording with on balance a better cast and the voices well forward.