Recording of the Week,  Liszt from Jonas Kaufmann and Helmut Deutsch

In the course of discussing possible contenders for our ongoing Great Recordings by Decade series with colleagues last week, I found myself once again singing the praises of a magnificent 2006 recital of Strauss Lieder from Jonas Kaufmann and Helmut Deutsch which has given me untold pleasure over the past fifteen years and would certainly accompany me to my hypothetical desert island should the need arise. That album (which won the vocal category at the following year’s Gramophone Awards) never ceases to knock me sideways thanks to the delicacy and declamatory splendour of Kaufmann’s singing and the nuance and imagination of Deutsch’s pianism, but I think today’s Recording of the Week might just surpass it on both counts. 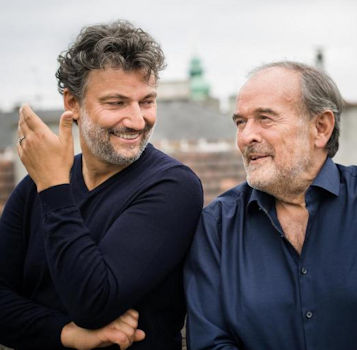 Conceived during lockdown and recorded last summer in Germany, the programme is a mixture of songs which have been in the pair’s repertoire for many years (the demanding Petrarch Sonnets, delivered with proper Italianate ardour, were the highlight of their Barbican recital in 2017) and others which Kaufmann explored for the first time whilst on enforced sabbatical last year, and the thrill of new discovery registers keenly at various points throughout the recital.

Things get off to an arresting, even acerbic start with Vergiftet sind meine Lieder (‘My Songs Are Poisoned’), which as Deutsch points out in his personable and insightful booklet-note is a second cousin of sorts to ‘Ich grolle nicht’ from Schumann’s Dichterliebe, written just a couple of years earlier; it also seems to look forward to Liszt’s son-in-law’s Tristan und Isolde, particularly when dispatched with the metallic bite and angry fervour which Kaufmann supplies here. (Preparations for his first Tristan were presumably well underway when the recording was made, and the programme includes several further ‘teasers’ for that long-awaited role-debut, with fleeting musical allusions to the opera popping up in Es war ein König in Thule and most explicitly in Ein Fichtenbaum steht einsam).

Two contrasting settings of the Goethe poem from which the album takes its title follow, the first highlighting both Kaufmann and Deutsch’s matchless gifts for spinning long legato lines and finding innumerable colours within the constraints of pianissimo - here, as throughout the programme, Kaufmann eschews that trademark ‘crooning’ which polarises many listeners, keeping everything entirely ‘on the voice’ and beautifully focused. Then the gloves come off for a high-octane, thrillingly dramatic account of Es war ein König, which builds from conversational intimacy to near-Wagnerian grandeur as Deutsch conjures a wealth of brassy colours to depict the king’s faithful retainers and the gloomy splendour of the ‘castle by the sea’ and Kaufmann responds with an intensity worthy of the dying Tristan.

The macabre, unsettling Die drei Zigeuner is another real highlight, with Kaufmann characterising the three gypsies quite brilliantly, and Deutsch working uncanny magic in the long, quasi-improvisatory introduction depicting the gypsy’s fiddle – although this marvellous pianist devotes himself almost exclusively to song repertoire, I’d give my right arm to hear what he might do with the Hungarian Rhapsodies (or indeed any of Liszt’s solo piano works, come to that). The Petrarch Sonnets find Kaufmann in absolute peak vocal form, cresting the top Cs with ease and showcasing that distinctive, bronzy glow which has won him such success in Verdi and verismo roles; there’s not so much as the merest hint of wear and tear from a decade of Florestans, Parsifals and Siegmunds, and he yields nothing to the rather lighter voices usually associated with these songs when it comes to flexibility and youthful lyricism.

It’s wonderful, too, to hear a handful of songs which remain relative rarities on disc and in recital, such as the lovely Die Stille Wasserrose (a particular favourite of Deutsch’s) and the lengthy, Weltschmerz-laden Ich möchte hingehn, where Kaufmann again taps into the Tristan-esque longing for oblivion to dramatic effect. All in all, this is quite the finest recording he’s made for Sony, and a testament to one of the greatest Lieder partnerships of our time. 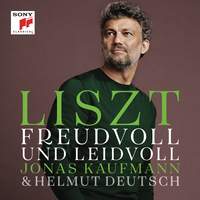