There’s recently been a small crop of violin recital-albums featuring notable instruments – Nathan Meltzer’s To Roman Totenberg showing off one with a lost-and-found backstory worthy of a heist caper, Francesca Dego’s Il Cannone devoted to Paganini’s erstwhile instrument, and Jake Heggie’s powerful “Violins of Hope” project centred around the restoration of instruments owned by Holocaust survivors. They certainly seem to represent a growing trend towards showcasing the personalities of instruments as entities in their own right, and today’s Recording of the Week takes this to a new level with not one but twelve unique instruments made by the legendary craftsman Stradivari, each ably handled by Janine Jansen with the accompaniment of Antonio Pappano (once again reminding us all that he remains as formidable – yet sensitive – a pianist as he is a conductor). 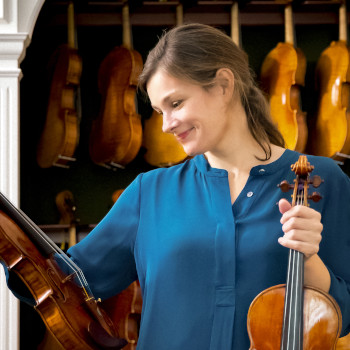 Jansen and Pappano have assembled a heart-on-sleeve and unashamedly sentimental programme of Romantic miniatures and arrangements ranging from Falla and Ravel to Jerome Kern by way of Tchaikovsky and Rachmaninov – in many ways exactly the kind of fare that these instruments would be “used to”, given the artists who have held them in their immediate past. There is certainly a feeling of a thread of affinity linking performer, instrument and repertoire that seems to go beyond what one would normally hear, though I’d struggle to articulate exactly what creates this impression.

Inevitably, it’s difficult to know how much credit to ascribe to Jansen for the colours on display on this album, and how much to her selection of instruments. Is the striking muted ethereal quality of her account of Szymanowski’s Fontaine d’Aréthuse the 1699 Haendel instrument at work, or her own sensitive musicianship? Would the Big Tune of Suk’s yearning Píseň lásky have the same proto-Hollywood undertones without the 1715 Alard’s contribution? And is it the instrument, the arranger (one A. Pappano) or the soloist who really elevates Kern’s Yesterdays from a relatively straightforward Marschallin-style piece of nostalgic reminiscing into the haunting encore heard on this album?

Instruments (and their makers) have certainly hitherto been a relatively overlooked participant in the music-making process, compared to the more obvious and direct contributions of composers, arrangers and performers. The flurry of interest in individual instruments suggests, though, that more and more players (chiefly violinists, naturally) are curious to explore the resonances, both literal and historical, that come from playing a specific instrument. Still, at the risk of sounding like a joyless iconoclast, at the end of the day these magnificent specimens are still tools, not wizard-forged magical artifacts; the unique and special qualities with which they might imbue a performance can only be coaxed out by the touch of a master musician. It should come as no surprise to anyone who’s followed Janine Jansen’s career that she fulfils that role perfectly.

Many of the violins played here, in addition to the prosaic years of their manufacture, bear nicknames that reveal their illustrious pedigrees of previous wielders; the 1715 Shumsky/Rode that is Jansen’s main performing instrument, the 1716 Milstein and perhaps most famously of all the 1734 Kreisler. The unique sense of inheritance when hearing Kreisler’s compositions played on the instrument he himself performed them on (and likely used in the process of composing them) is particularly palpable. I recall feeling something of the same sense of history in my early teens, seeing the very keyboards played by Beethoven, Haydn and others in house-museums – some of them, at least then, available to be tinkled on by the mere mortals of the visiting public. Of course, Jansen is here doing very much more than plinking out a couple of hesitant, awestruck notes and scuttling off; these instruments were always meant to be played and brought to life, and there’s no question that she achieves this. The repertoire she’s chosen may consciously look back to a different age, one marked by sensibilities that might seem saccharine or even mawkish to some today, but by showcasing these twelve remarkable instruments and committing herself fully to the beauty of that soundworld, she demonstrates that they are very much more than museum pieces. 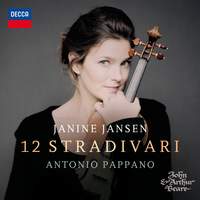