Interview,  Bomsori Kim on Wieniawski and the inspiration of the stage

Korean violinist Bomsori Kim makes her DG debut with an album celebrating the fruitful cross-pollination between the operatic stage and the concert-hall. Fantasies on Carmen and Faust and arrangements of operatic numbers by Gluck and Saint-Saëns are complemented by dance-inspired numbers, including an arrangement of Tchaikovsky's sweeping Pas de Deux and several virtuosic compositions by the Polish virtuoso and composer Wieniawski.

It's an album not without a certain irony, coming as it does during a time when much of the world is facing major restrictions on how much activity can take place on stage. I spoke to Bomsori about her relationship with this music, her drawing-together of dance and music in her playing, and what her own plans for future appearances of the violin on stage look like.

As a child you studied not just music but also ballet – do you think this training in dance has continued to play a part in your performing?

I always think about vocal and dance elements in the music as very important subject. For me, this is where the instrumental music comes from, so my early ballet study helped me a lot understand the dance character of many pieces in the classical music. The repertoire I chose for my new album is related to voice and dance. For pieces like Wieniawski's Polonaise, which is a very special Polish dance, you need to understand first the character and the movement of the dance, before you even start to study the piece. And dance is about the pulse of our heartbeat. These two elements, voice and dance cannot be neglected or separated in music. The most essential components.

You mention having fallen in love with the violin on hearing a performance by Kyung Wha Chung – who would you say are the other main influences on you as a violinist?

At age of 5, I attended a recital of KyungWha Chung - and I totally fell in love with the instrument because the sound she made was so deep, direct, and emotional. Later I was listening to the other great violin legends, but maybe the biggest impact on me as the musician is made by the opera. I was always fascinated by the great opera singers and during my study in New York, I was trying to attend as many opera performances as possible. I always wanted to be a singer, but since my voice was not strong enough, I tried to sing trough my violin.

In addition to having won numerous prizes in the competition that bears his name, you’ve recorded Wieniawski on a previous album (his second concerto, with the Warsaw Philharmonic). What is it about Wieniawski that is so uniquely special?

Wieniawski was the legendary violinist himself and he only wrote violin music for himself to perform. So his works are very well and effectively written for violin and he broke the limits and broaden the horizon of the use of violin with his music. The challenge is that I always used to have a fear of playing his pieces because I thought I am just not brilliant enough to play them. I used to think that his music is only about the virtuosity of violin but later, I figured out that I was wrong. Time passed and brought with it a new appreciation of Wieniawski - and the approachable notion that his art runs deeper than that of the virtuoso showman. He didn’t really want to show off, actually. It’s deeper than that. His music is really about singing, and from the heart.

The Waxman and Wieniawski opera fantasies on this album play with themes from well-known operas of their time; were these as widely-performed as the piano equivalents by Liszt, Thalberg and others?

The opera fantasies were once the most beloved repertoire by the 20th century legendary violinists such as Jascha Heifetz, Nathan Milstein, Fritz Kreisler and Yehudi Menuhin of so-called violin’s golden age. Before that, Pablo Sarasate composed many fantasies on the popular opera themes, so with my album, I wanted to continue this great violin tradition.

When you’re performing a piece originally sung by an operatic character – Carmen, Delila, Faust – how much do you try to get into the mindset of that character, rather than approaching the music as simply a piece for violin?

I try to find the balance between both elements. It is very important for me to sing on the violin, to breathe and produce the most possible beautiful singing voice but at the same time, these pieces are the new violin compositions with the great instrumental virtuoso passages and little cadenzas. So it is also very important for me to show the instrumental, virtuoso character of the violin at the same time.

Paul Kilbey observes that this album invites listeners onto an “imaginary stage” while COVID-19 continues to force the closure of most live venues. Have you been able to lay any plans for returning to the real stage yet – or for future recordings?

I’m currently in South Korea on tour, performing every day for the live audiences and I’m planning to come back to Europe next week for the festival Summer. I am playing 9 concerts as the Focus Artist in Rheingau Music Festival 2021 including all five Mozart Concerti with Camerata Salzburg, and Tchaikovsky Concerto with Royal Philharmonic Orchestra and Maestro Vasily Petrenko. At Gstaad Menuhin Festival 2021, I am playing two concerts as “Menuhin’s Heritage Artist” and this is the five-year-long residency of the festival. I am also very excited for concerts in fall and winter, which include concert debuts in Denmark, Copenhagen with Danish National Symphony and maestro Fabio Luisi playing the Nielsen concerto, and concerts in Japan with Tokyo Symphony and maestro Krzysztof Urbanski with Szymanowski's Concerto No.1. And I’m very happy that there are some great recording plans to realize very soon. 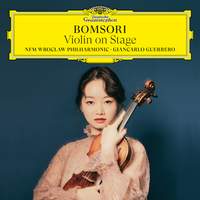