When I heard whispers last year that Cecilia Bartoli was recording the title-role of a major opera, I’ll confess that Bellini’s self-immolating Druid priestess wasn’t the first thing that sprang to mind: the Italian mezzo has spent the past half-decade unearthing forgotten baroque repertoire, so I’d expected something eighteenth-century (Handel’s Cleopatra, perhaps?), or a world première recording, rather than one of the greatest of all bel canto operas. There’s also the small matter of voice-type: Bartoli’s dark, small, astonishingly flexible voice defies conventional vocal categories, but like most people I’d always thought of Norma as a true soprano role, and a reasonably dramatic one at that (it’s often been associated with singers who specialise in Puccini, Verdi, or even Wagner rather than Bartoli's Handel and Vivaldi). 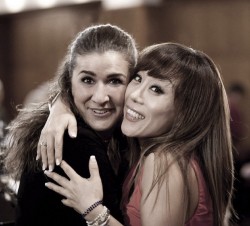 Well, I stand corrected on both counts: this new recording is the product of as much research as any of Bartoli’s recent baroque excavations, as she and conductor Giovanni Antonini have gone back to the original manuscripts and accounts of the very first performance in order to present a version of the opera as close as possible to what Bellini would have heard in 1831, rather than viewing the score as a precursor to verismo and the high-cholesterol operas of the later nineteenth century. There are a few textual differences from the ‘standard’ version of the score – original modulations are restored, meaning that some sections take place in a slightly lower key – but the most significant feature of this new, period-instrument Norma is the vocal casting. Like Bartoli, the original Norma was a mezzo with a strong upper register rather than a bona fide soprano, whilst the role of Adalgisa (the young acolyte who unwittingly steals the heart of Norma's Roman lover) was taken by a light soprano rather than a mezzo as is often the case today. Replicating this original balance, Antonini has cast the Korean coloratura Sumi Jo (known for stratospheric roles like the Queen of the Night) as Norma’s rival, whilst the celebrated Rossini tenor John Osborn is Pollione, the man who loves them both.

So, how does it all work? Quite beautifully. I’d forgotten what a compelling vocal actress Bartoli can be and what a keen sense of dramatic pacing she possesses (she hasn't recorded a complete role on CD since 2008). She sings Norma entirely on her own terms, without pushing her instrument to emulate any of her illustrious predecessors, and whilst listening I simply couldn’t imagine the role sung in any other way. Certainly she doesn’t open up at the top as thrillingly as a singer like Montserrat Caballé, but she works the text with mesmerising clarity, and her characteristic quick vibrato (not to all tastes, I know) flags up the character’s neurotic intensity rather than her stoical grandeur. It took me a minute to adjust to the blend of voices in the long duet with Adalgisa simply because it’s so unusual to hear the darker voice on top, but she never overwhelms her lighter-voiced colleague and for once Adalgisa truly sounds like the young, innocent foil to Norma’s volatility. Osborn is splendid, too: again, his voice is far slimmer than many Polliones on disc (both Pavarotti and Domingo sang the role at one time) but he has plenty of heroic ‘ring’ when needed, as well as the tonal glamour to be a believable love-object.

If you don’t already have this opera on disc, this is entirely compelling on its own terms; if you already own one of the older sets, it makes for a fascinating contrast. 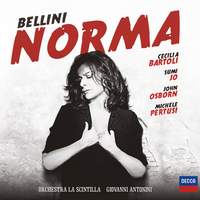