Interview,  Penelope Thwaites on her choral music and songs

As if a highly successful career as a concert pianist were not enough, Penelope Thwaites has developed a distinctive and engaging compositional voice ranging from simple choral homophony, via vivid psalm-anthems and other sacred music, to punchy rhythmic works drawing on her lifetime of globe-trotting and her experience of an enormous variety of non-Western musical cultures.

I was lucky enough to experience this first-hand during the recording sessions for her new album on Somm, which brings her music - previously relatively rarely heard - into the spotlight. I spoke to Penelope about the ingredients that went into this fascinating musical melting-pot.

You’ve had an international career as a concert pianist, in addition to composing and conducting around the world. Has the constant presence of the piano in your musical life shaped the way you think about composing music of your own?

Playing and sharing great music in performance have remained vital to me. I started playing the piano before the age of 5, but apparently I began singing at the age of 2. Singing is our first natural musical impulse. And for me, the key word is “natural”.

My most influential piano professor, Albert Ferber, advised “be yourself completely”. If one can continue to incorporate the disciplines of developing technique and interpretative maturity, but also remain authentically oneself, that has real value in any genre of music- making. It is not always easy, since trends, fashions, pressures of what someone else thinks or is doing can wrongly divert a musician. Of course we must learn from others, but we must also remain the person we truly are and develop from that viewpoint; develop and go on developing.

The Missa Brevis has an immediately approachable and uncomplicated style that at times seems almost specifically designed to get the toes of a congregation tapping – especially in the Gloria. Do you envisage this Mass setting entering the repertoire of ambitious parish choirs?

I hope my remarks above make it clear that my approach is a serious one, seeking (as in this Missa Brevis) to express above all the meaning of the words. There is no “what style shall I adopt?” still less some “specifically designed” route to a spurious aim. That would be the world of the commercial jingle! To try to reflect in musical terms these words of colossal power is a daunting challenge. It does not happen overnight. It takes weeks/months of thought on details and on the crafting necessary to make a complete work of convincing design.

I will be delighted if choirs are drawn to this new work. Certainly Ex Cathedra told me they enjoyed singing it, and their founder and conductor, Jeffrey Skidmore, whose whole career has been building choirs, has expressed the view that this piece should have a future. He also remarked in rehearsal that although the score had at first seemed straightforward, to execute the many detailed markings and nuances turned out to be a challenge. A clear texture may be more difficult to hide behind than a thicket of supposedly brilliant complexity.

Cheerfulness in sacred music is an interesting point. I shall never forget the experience of singing as a student in Haydn’s Nelson Mass. That uninhibited Gloria expresses to me the composer’s oft- quoted words “Whenever I think of God I can only conceive of Him as a Being infinitely great and infinitely good. This last quality of the divine nature inspires me with such confidence and joy that I could have written even a Miserere in tempo allegro.”

Your 1968 setting Kano takes the words of a Scottish poet, responding to his perceptions of Nigeria. Half a century on, we’re now perhaps more alert to the complicated nature of this outside perspective than we once were;

The words mentioning “jet planes” place the song in its time. As I observe in the liner notes, it is right that those of us with a colonial past identify the wrongs and admit them. But there are other narratives too. Here was a young Nigerian leader – robed and gracious – attending an international conference on behalf of his country. A fellow delegate who knew something of Kano at that time, and clearly loved what he knew, wished to offer the Emir a welcome. A special song was one way of doing it. (The custom has applied over many centuries and through many cultures). The gesture was respectful and genuine, and of its time. The chorus that sang the song, many in their various national costumes, symbolised a welcome to the Emir into that international community.

So the question "do you think Kano could have been written today?" would seem to disregard a sense of historical, and perhaps social perspective. The words of Kano are wholly appreciative and valuing of Africa’s richness in cultures – something worth bringing forward at any time.

You mention being aware, when writing the Mass, of how many settings of the same words already existed. The Shakespeare Songs also feature some commonly-set texts – did you find the existence of other settings a hindrance, an inspiration, or maybe neither?

It will be for listeners to decide if they enjoy and find something fresh in my settings. I do hope so.

I avoided reminding myself of other settings, although years ago I loved singing some of the Quilter ones. All my life I have loved Shakespeare’s words for their intrinsic music - and felt why add to it? Well partly, because Shakespeare wrote them as songs. All of these ones, by the way, are set outdoors, it seems. The bucolic idea is strong. But there is so much packed into these lines. ‘When icicles hang by the wall’, for example: every phrase suggests a different scene and a different mood. I greatly enjoyed trying to project that.

Many of my settings have been prompted by a particular person or occasion, as I have explained in the liner notes. The context gives a fresh impulse. I set ‘Fear No More’ for an angry young man who was toying with playing the guitar in a rock context. It could be done like that – and Shakespeare’s words include at times an inherent anger. Then, because my daughter’s wedding was imminent, and she and her fiancé requested a new setting of ‘Under the Greenwood Tree’ I was later drawn to two other songs about love –both of which make the point that life is brief (as it was, and is), so grasp the moment! My niece, also a singer, arranged a concert of my music in 2017, and the Five Shakespeare Songs were premiered as a group then. It is good to try something new : I had not written previously for double chorus, as in ‘It Was a Lover and his Lass’ and I knew a really good choir would enjoy the challenge, as did I.

Can you tell us a little about how this album came into being? And do you think there’s potential for a second volume in the future?

My children grew up with a mother pursuing a concert pianist’s career, but earlier, I had worked in the musical theatre and had had various commissions, and I continued writing from time to time. My son had sung as a boy soprano with the Finchley Children’s Music Group, and has always had a broad approach to music . He was the first to sing my setting of ‘Lead Kindly Light’, later published as a choral work.

Some years ago, having heard again some of the repertoire at Schott Music (they have worked with Bardic Edition to publish and distribute certain works), he urged me to get my music out more widely. To feel the strong support from younger relations is extremely encouraging (although my late husband and many older friends felt the same). So that impetus, plus, I think, a much more broad-minded approach from the classical music community to musical styles, these factors pushed me towards a massive project in which interest from professional colleagues was also a key. Siva Oke of SOMM recordings (who has already recorded my West End musical Ride!Ride!) felt that the timing for this project was right. James Gilchrist, singing through some of the repertoire, suggested Ex Cathedra, and their conductor, Jeffrey Skidmore, again hearing the repertoire, decided he would like to do it. I am fortunate to have in James, Carolyn Sampson and Will Dazeley outstanding soloists who believe in the music.

I do not take for granted how important is the support of both friends and musical colleagues with very high standards. I share their approach – but, as the saying goes, there is no accounting for taste. Reception is not in our hands. I believe in every work that we have included on this disc, and yes – there is a lot more repertoire, in a variety of styles – styles which have not been self-consciously adopted, but each of which, I hope, matches the subject in hand. We all continue to learn, and I am certainly no exception. There are many more ideas in my head! I am grateful to have worked with musicians of tremendous quality, and to have studied with musicians whose approach has been both demanding and also, wide-ranging.

That is what appeals to me. 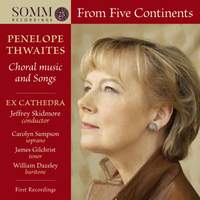 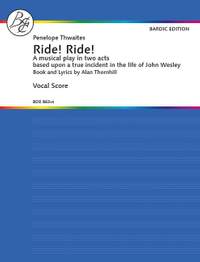 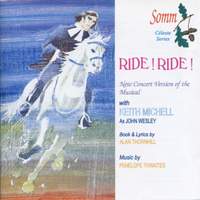