Recording of the Week,  Presto Personal Favourites from 2019

Since announcing our top Ten Recordings of the Year (decided by committee and revealed a fortnight ago), the Presto team have spent a lot of time discussing and revisiting some of our own personal favourites - most of which featured in the Top 100, but haven't had a newsletter devoted to their delights! Instead of a full-length review of a single recording, five of us have decided to share the honours this week and each sing the praises of an album that we've particularly enjoyed over the past year.

It is a brave pianist who chooses the last five Beethoven Piano Sonatas for their first solo recording. But that is exactly what the brilliant Russo-German pianist Igor Levit did back in 2013. And the gamble (if it ever really was one) paid off handsomely, with widespread critical acclaim and recognition quickly following him around the world. Six years later he has now recorded the other 27 Sonatas, and all 32 are now handsomely presented in a 9 disc set released earlier this Autumn by Sony.

Levit’s general tendency to take very fast tempos for outer movements creates readings which are immediately both fresh and exciting, and whilst very occasionally I pine for a little more time to breathe, it never seems fast merely to shock or to show off, and the flashes of humour and conflict which he finds throughout this set are always vibrantly and brilliantly executed. The often broad adagios and slower movements, carefully phrased and always intricately balanced, provide the contrast and structural shape which really makes each sonata ‘work’ as a piece. The recorded sound is excellent throughout, with the both the quietest beautiful pianissimo and the loudest explosion stunningly captured. Highly recommended, even for people who own several complete cycles already. 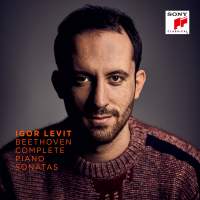 Undoubtedly one of the most enchantingly beautiful recordings I’ve heard all year: from the very first entry of Sandrine Piau’s exquisite voice in Saint-Saëns’s tender setting of Victor Hugo’s poem, Extase, I was completely captivated. Most of the repertoire was new to me, so I’ve delighted in acquainting myself with songs by Charles Bordes, Gabriel Pierné, Théodore Dubois, and Guilmant, alongside more familiar offerings by Massenet and Berlioz.

Piau is given fantastic support from Julien Chavin and Le Concert de la Loge, including some nimble butterfly-effects from the principal flute in Saint-Saëns’s Papillons. She closes with a charming account of the popular Martini song, Plaisir d’amour, and I can’t think of a more fitting conclusion to a recital that is just bursting with both plaisir and amour. 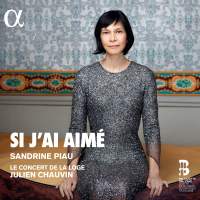 I was brought up on the classic 1950s & 1960s Vaughan Williams recordings of Sir John Barbirolli and Adrian Boult followed by the more recent interpretations of Richard Hickox, Andrew Davis and Bernard Haitink. As we enter the 2020s Andrew Manze now takes on the mantle of today's finest Vaughan Williams conductor with his recent must-have 2016-2019 symphonic cycle on the fine Onyx label, which you can view here.

Having completed this symphonic cycle, Manze and his Royal Liverpool Philharmonic Orchestra now turn their hands to this recording of Vaughan Williams's orchestral works, containing warhorse masterpieces such as The Lark Ascending, Fantasia on Greensleeves & Fantasia on a Theme by Thomas Tallis, in heart-warming and sonorous interpretations, alongside the beautiful rarity of the composer’s own orchestra-only arrangement of Serenade to Music. The very highest standards of performance and musicianship can be found in these recordings, with particular mention going to James Ehnes's flawless, vibrant and lyrical violin playing. A must-have recording for your collection, containing distinguished performances. Treat yourself now! Highly recommended. 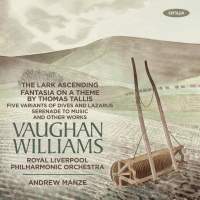 Vaughan Williams: The Lark Ascending & Fantasia on a Theme By Thomas Tallis

Rautavaara’s Finnish-language Vigilia seems, among other things, to answer the question of what Rachmaninov’s Vespers might have sounded like if written about sixty years later in a less conservative idiom. The emotional power of the Orthodox choral sound is here, but shot through with Rautavaara’s more exotic tonal language, with glissandi, dense additive chords and more all creating a spellbinding effect – mystical and ritualistic one moment, ecstatic and exultant the next. The twenty-one singers of the Helsinki Chamber Choir produce a sound that belies their limited numbers, and sustain for seventy minutes the incredible intensity that Rautavaara’s rich, dark work demands. A choral tour de force so compelling that the language barrier is simply swept aside by the music’s power. 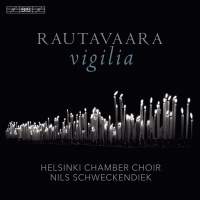 The young Polish countertenor’s second album for Warner Classics somehow passed me by when it was released in November, but after hearing him perform most of the programme in an intimate but exuberant recital at Wigmore Hall on Saturday I’ve been listening to it more or less on loop – his sheer joy in the act of singing comes across just as strongly on disc as it did live, and the voice has gained new colours and strength since last year’s Anima sacra. There are fireworks aplenty in arias from Scarlatti’s Pirro e Demetrio and Conti’s Don Chisciotte in Sierra Morena (in which he ornaments all the way down to a bottom C!), and Il pomo d'oro are fantastically unbridled in Nicola Matteis’s purely instrumental Ballo dei Bagatellieri. A baroque recital to treasure. 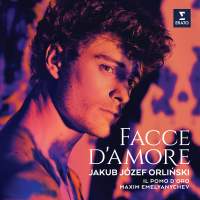