It is a brave soprano who chooses to launch a major recording career with Strauss's Four Last Songs. The set, written - as the name suggests - towards the very end of the composer's life in 1948, has achieved a very special status in the repertoire and has been recorded by almost every great soprano ever since. Yet that is precisely what EMI's new signing, 44 year old Swedish soprano Nina Stemme has chosen to do.

There are numerous great recorded versions of the work and everyone has a different favourite. Schwarzkopf has always been near the top of my list, but she has three different versions to choose from and they are all very different. Janowitz and Juranic both have many admirers, as does della Casa (first interpreter on disc). It is not at all an obvious choice, and when BBC Radio 3's Building a Library reviewed the work a few years ago they came up with Felicity Lott as Top Recommendation! (view all recordings)

I have to say personally I find Lott's voice too light for these songs. I enjoy a rich operatic voice with plenty of warmth and tone. I also expect a good tempo and some ebb and flow, and none of the sentimentality and wallowing you hear on many recordings. Nina Stemme fits my ideal pretty closely and, with the unusual coupling of scenes from Capriccio and Salome, she has further opportunity to demonstrate her natural affinity with this style of singing. This comes highly recommended, and is out on April 2nd. (See below.)

The reason I thought I should mention this now is because Testament have just released Kirsten Flagstad's World Premiere performance. The recording has been available on other labels before but the sound has always been so dreadful that it is barely listenable to. Testament have improved it a lot and it is fascinating to hear some clues as to what Strauss might have imagined for these songs (although he died 9 months before the premiere he was the one who engaged Flagstad so this recording does have some authority). (See below.)

Interestingly Stemme's and Flagstad's voices are not dissimilar, and their animated and operatic approaches are not unrelated either. But while the latter has a fascinating historic value, the sound is still too poor to enjoy over and over. The sound on the Stemme on the other hand, featuring the stunning Royal Opera House Orchestra under Pappano, is to die for. 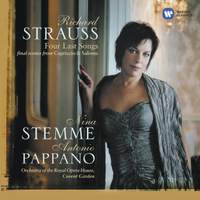 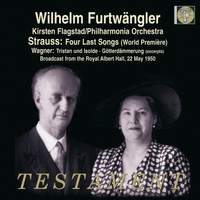