Some of the most extroverted Bach I’ve ever heard forms this week’s Recording of the Week, as Iranian-American harpsichordist Mahan Esfahani brings his customary panache to the seven toccatas for keyboard, BWV910-916. The intellectual side of Bach’s finely-woven counterpoint sometimes draws contemplative, reticent accounts from performers, but from the very first flourish of BWV910, it’s clear that Esfahani is not remotely interested in such an inward-looking approach. Indeed, the term “flamboyant” springs unbidden to mind at numerous points on this album. 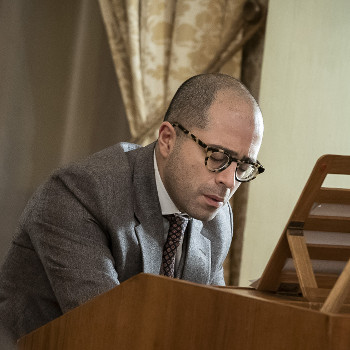 Not only is Esfahani quite happy to apply generous quantities of rubato in order to emphasise the rhetorical gestures of the music, but he’s also playing on an instrument that affords him a much wider range of expressive colour than one might normally expect of the harpsichord. For those who take an interest in such things, it’s a hypothetical reconstruction of an instrument by the early eighteenth-century manufacturer Michael Mietke, recreated and expanded by Prague’s Jukka Ollikka incorporating elements from Pleyel – but sonically the key point is that it offers stops sounding both an octave above and an octave below the struck note. Both are used liberally, but it’s the 16’ bass coupler that really makes the difference. There are points throughout the album when Esfahani manages to conjure from the harpsichord a bass roar evoking the sonorous reed stops of an organ.

That’s not to say, of course, that the music is universally weighty; far from it. The middle of BWV912 is appropriately spiky, and most of the toccatas have at least one movement with a simpler, calmer mood. Here, not surprisingly, Esfahani discards the 4’ and 16’ stops and descends back down to the realm of mere mortals with a more conventional, and far lighter, sound. That being said, his decision to close one such passage, partway through BWV913, with an unexpected clanging pedal D on the 16’ stop is surely a cheeky reminder that the richer and more powerful sounds are always just one tiny gesture away from returning in full force, and that the listener shouldn’t get used to anything “normal” or “ordinary”. This toccata has perhaps the most forceful ending of all seven – a fortissimo cadential figure that brooks no argument and, with the 16’ heavy artillery once again deployed, brings the piece to a thunderous close worthy of an organ voluntary.

Devotees of other Baroque composers may excommunicate me for this, but I’ve often felt that Bach’s gift of writing counterpoint that is at once technically correct, intellectually satisfying and profoundly emotionally rewarding is completely unique; every so often when playing his keyboard music a passage pops out that is simply a delight to play over and over again because of the way it unfolds. This is no less the case in these slightly less familiar toccatas; the fugue that closes BWV911 is one such example and Esfahani audibly revels in every bar. His rubato is again the tell-tale clue giving away just how much he is enjoying the music (a quality that isn’t necessarily a given in recordings), but listening to the peerless counterpoint it’s impossible to fault him for such self-indulgence; quite the reverse, indeed, as the music seems the better and the more alive for it.

It’s thought that these toccatas were written, in part, as vehicles for Bach to show off his own technical skills at the keyboard; certainly they incorporate some impressive levels of virtuosity. It should come as no surprise that Esfahani is undaunted by such challenges, but what really sets this album apart is not his fingerwork but the way he exploits the capabilities of his instrument to also bring out the drama in these showy works. Perhaps best washed down with a ruminative Dowland pavan or two to lower one’s pulse afterwards, his account of the seven toccatas is an exhilarating ride in the harpsichord equivalent of a souped-up sports car, driven by surely the finest and most assured driver alive today. I have no hesitation in predicting that this recording will scoop award after award.

I was also lucky enough to be able to talk to Mahan in more depth about this recording earlier in the week – so if you're interested in the inside story from the performer's perspective, check out our interview! 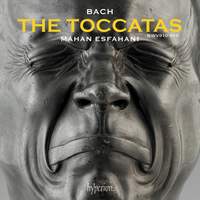