Interview,  John Andrews on Arthur Sullivan's The Light of the World

Premiered in Birmingham in 1873 (shortly before the composer began the long-term collaboration with WS Gilbert which would make him a household name), Arthur Sullivan’s The Light of the World drew favourable comparisons with Messiah, the Bach Passions and Mendelssohn’s unfinished Christus from first-generation reviewers for its ambitious and imaginative treatment of episodes from the life of Christ - but by the early twentieth century its popularity had dwindled, and it was only last month that the first commercial recording of the work was released. I spoke to its conductor John Andrews about the score’s many innovations and beauties, how and why Sullivan’s oratorios fell out of the repertoire, and his plans to record more of the works which the composer wrote independently of Gilbert…

The piece was extremely well-received at its premiere, but had already fallen out of fashion by the end of the nineteenth century – do you think the work (and indeed Sullivan’s sacred music in general) was eclipsed by the success of the Savoy Operas, or did it simply not date well?

There was already a little reserve, even snobbishness, at the time of the premiere (expressed in early reviews) about a composer of light comedy writing on serious elevated subjects. But I think its later eclipse was much more to do with the rise and dominance of the rich late Romantic style in general, and, in England, Elgar in particular. It wasn’t only Sullivan who suffered; that whole generation of English composers between Mendelssohn and Elgar (including Stanford, Parry, Frederic Hymen Cowen, and Alexander Campbell MacKenzie) largely disappeared from the concert hall and remain very much at the margins. After the First World War, the Victorian style seemed hopelessly old-fashioned, but at the same time, the continued existence of the D’Oyly Carte company meant that the Savoy Operas were by far the most popular music to have survived from that period – and were many people’s first experience of opera. They coloured Sullivan's reputation in the twentieth century, which definitely hindered an appreciation of his serious works.

Which composers would you identify as having had the most direct influence on Sullivan in this score? Does the time he spent studying in Leipzig make its presence felt?

Sullivan’s voice is always individual, but in his serious works, the spirit of Mendelssohn never seems to be too far away, and of course in the ambition and scope of the piece, Elijah is the most important precursor. But in The Light of the World he very consciously reaches back through the English Choral tradition. ‘In Rama was there a Voice heard’ depicts Rachel’s lamentation in the aftermath of the massacre of the innocents. The sustained pedal and rich chromaticism shows a deep affinity with Purcell’s funeral sentences. Sullivan goes as far as to quite Orlando Gibbons directly in the chorus ‘Blessed be the Kingdom’. Shortly before composing this work, Sullivan heard a visiting Russian Orthodox choir and the unaccompanied chorus ‘The Lord is Risen’ seems to me to be a direct tribute to their sound and passion – almost pure Rachmaninov.

Can you point to any particular passages which show Sullivan at his most striking or innovative?

By far the most striking innovation is his treatment of the personality of Jesus. There had been a very strict taboo concerning the portrayal of Jesus directly. In earlier works, his words and deeds are always presented through a gospel narrator. Sullivan’s vision was to present the man, fully human and absolutely real, in a genuine and emotionally gripping drama without the distancing effect of a narrator. In fact Sullivan uses a narrator only once, at the very beginning, to introduce the shepherds. Thereafter, everything takes place in the first person and we are in the midst of the unfolding story.

At the same time, Sullivan was not suggesting that Jesus was mortal and his role as Light of the World had to be as real as the man. To do this he created an orchestra-within-the-orchestra, and Jesus’ words are always accompanied by the deep, radiant, ensemble of cor anglais, bass clarinet, contrabassoon and lower strings. This very special ‘halo’ of sound marks his divinity throughout, and the importance of this can be seen in the fact that Elgar (who played the piece as a young violinist) not only dispensed with the narrator in The Apostles (1902), but also accompanied the words of Jesus with just the violas. The device of using an inner orchestra would of course be used again by Britten in the War Requiem, as well as by Macmillan and Birtwistle more recently.

Verdi was working on his Requiem at exactly the same time as Sullivan was composing The Light of the World: given that both composers were best known for their stage works, do you see any similarly operatic qualities in his writing here?

There is no doubt that Sullivan thought of this a piece of theatre. By choosing to concentrate the whole story into six, taut, dramatic scenes he brings the focus down to real characters reacting to extreme situations. It’s not unlike Tchaikovsky’s distillation of Pushkin’s lengthy poem Eugene Onegin into a set of scenes, often separated by years. But it’s easy to forget that the English oratorio tradition had always been rooted in the drama of the theatre right back to Handel. All of Handel’s oratorios (even Messiah) had been written for theatre rather than church performance and in many respects, Sullivan was being true to that tradition.

The piece has been sorely neglected in live performance as well as on record: would you say it’s feasible for amateur choral societies, or are the logistics and musical demands too great?

The challenge of the piece is its sheer size and physical heft, but it’s really not that much bigger than lots of pieces that amateur choral societies tackle all the time. The orchestra is no bigger than Elijah or the Verdi Requiem. Six soloists is a lot but not obscene. Uncut, it is on the longer side, but no longer than the Bach Passions and there are some sensible cuts that could be made to keep it compassable in performance. It’s definitely a big beast, but an eminently tameable one!

You’ve made quite a speciality of Sullivan-without-Gilbert and Gilbert-without-Sullivan, having recently recorded Alfred Cellier’s The Mountebanks and a disc of Sullivan’s incidental music: was that pure serendipity, or did you set out to explore how things played out when the two ploughed their own furrows?

As always, it’s a little bit of both! The impetus to do both The Light of the World and The Mountebanks recordings came out of the success of my disc of Sullivan’s incidental music to Macbeth and The Tempest. I love rare and neglected music (I gave the British premiere of Rossini’s Pia de’ Tolomei with English Touring Opera a few years ago and am conducting Rossini’s Elizabeth 1st next year), and I’m not sure that the world needs any more G&S recordings for a while.

Several of Sullivan’s major sacred works remain commercially unrecorded or at least very difficult to track down on disc: might you tackle The Martyr of Antioch or The Golden Legend at some point?

A good question! First of all I’m back in the studio in January to record Sullivan’s late comic opera Haddon Hall, and shortly after that our recording of Thomas Arne’s very naughty The Judgment of Paris will be released. The Martyr of Antioch will definitely be next; we just have to triangulate orchestra, chorus, and big enough venue but hope to be able to do that in 2020. The Golden Legend was recorded twice, first by Charles Mackerras and more recently by Ronald Corp. Alas neither is currently available, but while those are in circulation it’s less of a priority , though I have performed it at the English Music Festival and would absolutely love to record it. It is such a different kind of piece; dark, overwrought and marvellously Gothic! 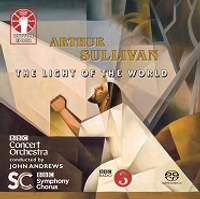 Sullivan: The Light of the World

Other recordings referenced in this interview 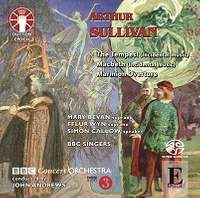 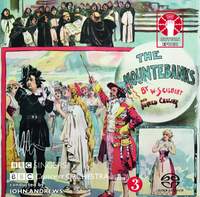