Recording of the Week,  Daniel Barenboim conducts Elgar's The Dream of Gerontius

It says much for the buzz surrounding Daniel Barenboim’s Berlin performances of The Dream of Gerontius last September (from which this recording was taken) that normal service in the Presto office was temporarily suspended the moment tickets went on sale, as myself and three colleagues started hatching plans for an auspiciously-timed away-day in Germany. Part of the draw, admittedly, was down to the fact that Jonas Kaufmann was slated to make his debut as the eponymous Dreamer, with Sarah Connolly reprising one of her signature-roles as the Angel who guides him through the afterlife, and I won’t pretend that there weren’t collective howls of woe chez Presto when both singers withdrew in the week before the performance; there was more to come, as Kaufmann’s replacement followed suit a few days later (September, it seems, is one of the cruellest months for vocal well-being), and as we set off from Birmingham airport there was much anxious checking of phones for news of yet another substitute or indeed a complete alteration to the programme. 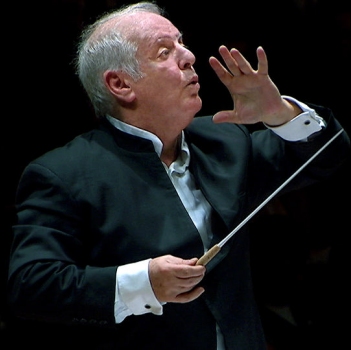 But by the interval of the concert the following night, we were in collective agreement that things had worked out for the best: this was a Gerontius of staggering power and terrible beauty, and quite possibly the greatest live performance I heard all year.

Kaufmann’s replacement’s replacement was eventually announced as the young British tenor Andrew Staples, which struck me at the time as an unexpected choice – his current operatic repertoire is largely made up of lighter lyric roles (I’d most recently heard him as Tamino, Albert Herring, and Flamand in Strauss’s Capriccio) rather than the Wagner heavyweights associated with Kaufmann and with his most recent predecessor in the part on record, Stuart Skelton. But right from his haunting opening phrase, ‘Jesu, Maria - I am near to death’, it was evident that we were onto something special: I was immediately drawn in by the plangent sweetness of the voice and his responsiveness to text, and by the time he’d reached the great ‘Sanctus fortis’ outburst in Part One (one of the role’s litmus-tests in terms of dramatic heft) it was also apparent that that sweetness didn’t preclude the strength needed for the work’s climactic moments.

Despite reportedly having only had time to run the piece with piano that afternoon, his synergy with Barenboim was absolute, putting me in mind of Karajan’s apocryphal remark to Plácido Domingo that ‘Among true musicians, rehearsal is not necessary’. That synergy was all the more remarkable given Barenboim’s incredibly elastic approach to a score which is already jam-packed with sudden shifts in moods and tempi – allargandos are stretched to near breaking-point, accelerandos take off like lightning – and it seemed that no concession was needed to accommodate a singer who’d flown in at a day’s notice; the words ‘Someone has me fast within his ample palm’ took on a new significance in this performance. The same was true of replacement Angel Catherine Wyn-Rogers, particularly affecting in a long-breathed Farewell that may have taxed a less opulent mezzo; her Angel has a maternal warmth reminiscent of the great interpreters of the mid-twentieth century rather than the androgynous beauty of an Alice Coote or a Sarah Connolly.

Thomas Hampson (last man standing from the original line-up!) was especially arresting as an austere Angel of the Agony, and the well-drilled Berlin chorus (though not quite so incisive with the text as the BBC forces on Chandos’s recent recording) were superbly characterful both as ‘Angelicals’ and in the Demons’ Chorus, all the more frightening here for being taken at a strict, steady tempo that wouldn’t have sounded out of place in the crowd-scenes of a Bach Passion. Elsewhere, Barenboim’s reading plays up the work’s affinity to Parsifal (I’d never noticed the kinship between the end of Part One and Wagner’s Good Friday Music before that evening) and even to the fire-and-brimstone sound-world of Verdi’s Requiem - the apocalyptic vision of God is the most terrifying and transcendent I’ve ever experienced.

I’m so very glad that Decca went ahead and captured this on disc even without the Big Names that were originally on board – it’s a glorious apotheosis to Barenboim’s Elgar series with the Staatskapelle Berlin, and I can’t wait to hear them in the Symphonies at the BBC Proms this weekend. 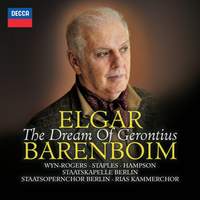